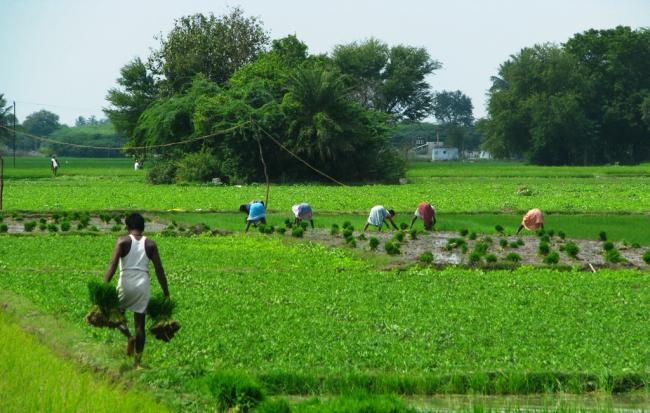 New food policies could take the bite out of Indiaâ€™s malnutrition, says study

Now India struggles with chronic malnutrition and child stunting, even though it produces enough calories to keep hunger at bay.

But new policies could diversify India’s diet with more nutritious foods, and not just feed India’s people but also feed them well, says a team of Cornell University agricultural economists. The policies could help other Asian countries too, they said.

“Absence of hunger does not mean better nutrition,” said Prabhu Pingali, professor of applied economics and management and director of the Tata-Cornell Institute for Agriculture and Nutrition (TCI). “Even in countries where you’ve got an adequate amount of staple grains, you still see high levels of malnutrition. And the reason is, people don’t have adequate access to micronutrient-rich crops: legumes, leafy green vegetables, fruit and other vitamin-rich foods. The prices of nutrient-rich foods continue to be very high.”

Most important, governments must broaden their exclusive focus on subsidizing staple grains. For example, India’s current subsidies include paying farmers a minimum price for their grain and selling it to poor consumers at a low price.

Instead, Pingali said, “They need a policy that provides incentives for farmers to respond to market signals and grow what the market demands.” That “crop-neutral” policy should include investments in market infrastructure, credit facilities and the availability of inputs such as fertilizers.

For example, the government could channel resources into the development of markets, from more paved roads and cold-storage systems to cell phones and other telecommunications networks to more effectively communicate market signals to farmers, the study noted. The government could also introduce more nutritious foods, such as millet, beans and lentils, into its subsidized distribution to the poor.

The key will be to break the link between the powerful farmer lobby (which benefits from the subsidies), the agencies that procure the grains, and the populist lobby that supposedly speaks for poor consumers, Pingali said.

One way India could do that is by providing a cash incentive for people to continue farming and grow what the market demands, rather than a subsidy to grow staple grains. And rather than giving the very poor grain outright or at low prices, it could provide them with cash to buy more nutritious foods like legumes and vegetables. “That’s what’s happening in large parts of Europe and even parts of the United States,” Pingali said.

Breaking the link between subsidized producers and subsidized consumers has several complications, the team admits. For example, in patriarchal areas, how could policies ensure women in a household have access to the cash to buy food for the family – and keep other family members from spending it on non-food items, like alcohol? Can a policy ensure that during the transition producers grow enough of the diverse foods to meet consumers’ demand?

It will take work to tackle a food policy that has been slow to respond to the country’s nutritional needs, Pingali said.

“But we need to first say, ‘We have a problem,’” he said. “And then we can talk about solutions.”