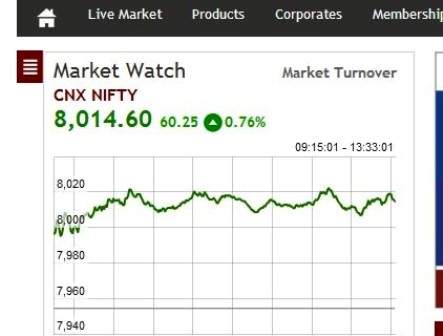 Indian stock market was on a roll for the past few sessions, where BSE and NSE indices, Sensex and Nifty respectively were creating new levels on a regular basis.

Banking on the latest GDP growth rate, Nifty today surged past 8,000 for the first time.

Data released on Friday showed that economic growth in April-June quarter hit 5.7 per cent, which is the highest in last two-and-a-half years for the quarter ending in June.

Not only Nifty, BSE index Sensex also recorded new high by getting past 26,800 mark today.

According to market analysts, the business-friendly policy of Narendra Modi-led NDA Govt. has paved the way for new small and medium investors who are pouring in funds in Indian markets.

Analysts say, Investors should keep investing. Even any big bad news will not have any major impact on the markets.

Vivek Gupta – Director Research, CapitalVia Global Research Limited, said: “Finally Nifty has crossed the level of 8000 today for which the markets were waiting for since long. It’s always best to go with the trend in the markets because if something you have to believe on or you got to stay with is the current trend of the market.  If everyone thought that the market just had an election rally and it would not sustain and those who are still skeptical on current rise of the markets may have to change their way of thinking before it’s too late."
"During a bull market, even any big bad news doesn’t have any major impact on the markets.Investors those holding positions in market should hold their positions. In monthly charts Spot Nifty had a breakout from an ascending triangle when it crossed the levels of 6357.10 which as per technical rules have minimum targets of 8180 and the rise can continue. Investors should try to take maximum from these bull markets and trail their positions.
"Capital Good stocks like Bhel and steel sector big giant SAIL still may have lot to offer to investors. Investors should keep investing and better be stock specific in their selections and focus on stocks and sectors which have not caught up to the rally till now. Any correction right now should not be anticipated as end of the market rally, rather it should be anticipated as an opportunity to invest.”
Related Images