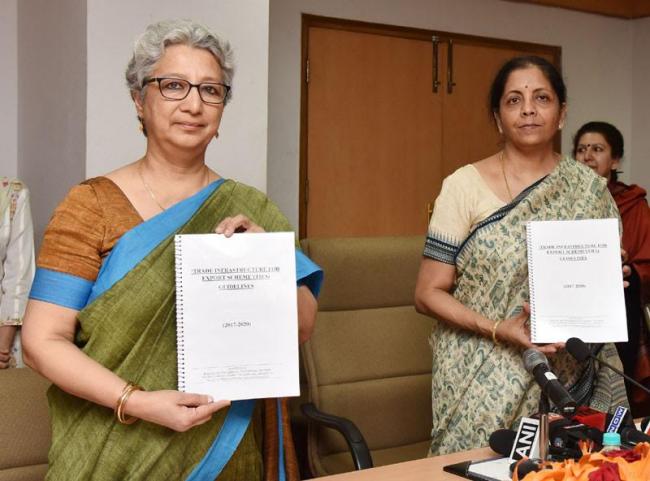 Sitharaman said the focus is not just to create infrastructure but to make sure it is professionally run and sustained.

The Minister added that there will be an Empowered Committee to periodically review the progress of the approved projects in the scheme and will take necessary steps to ensure achievement of the objectives of the Scheme.

She said the proposals of the implementing agencies for funding will be considered by an inter ministerial Empowered Committee specially constituted for this scheme and chaired by the Commerce Secretary.

While appraising the project, its justification, including the intended benefit in terms of addressing the specific export bottlenecks, would be evaluated, the Minister said.

She said the last and first mile connectivity projects related to export logistics will also be considered.

The Central and state agencies, including Export Promotion Councils, Commodities Boards, SEZ authorities and Apex Trade bodies recognised under the EXIM policy of Government of India are eligible for financial support under this scheme.

Central government funding will be in the form of grant-in-aid, normally not more than the equity being put in by the implementing agency or 50 per cent of the total equity in the project.

In case of projects located in north eastern states and Himalayan states, including J&K, this grant can be upto 80 per cent of the total equity, the release said.

The grant in aid shall, normally, be subject to a ceiling of Rs 20 crore for each infrastructure project.

The implementing agencies shall provide details of the financing tie-ups for the projects which will be considered before approval of the project. Disbursement of funds shall be done after financial closure is achieved.