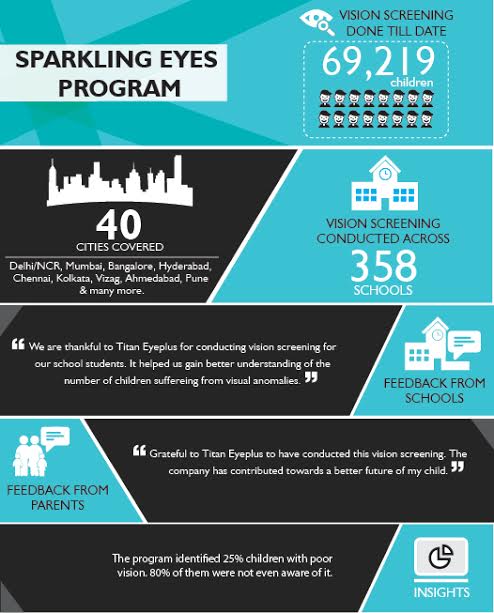 India Blooms News Service | | 23 Jan 2017, 05:09 pm
#TitanEyePlus, #Titan, #EyePlus, #Sparkling Eyes Program
Kolkata, Jan 23 (IBNS): While most parents are attentive on taking their children to the pediatricians or the dentists for regular check-ups, many fail to understand the importance of regular eye examination, even if the child doesnâ€™t wear glasses.

The campaign kick-started on the occasion of Children’s Day on Nov 14 with a mission to enable mass vision screening of school kids across the country, ensuring healthy eyes and optimal vision of children.

The first-of-its-kind initiative has been rolled out in 40 cities across the country, including Tier I, II & III cities. So far, the vision screening by Titan Eyeplus optometrists has been conducted across 358 schools, for 69,219 children between the age group of 6 and 14 years.

The findings from the initiative suggest some striking insights on the generic awareness about eye health of children in the country. While 25% of the children screened had deficient eye health, approximately 80% of them were not even aware of having poor vision.

As a part of the campaign, the optometrists from Titan Eyeplus visited schools across the country and conducted free vision screening using the Titan Eyeplus Vision Screening Kit aka Tevis, especially designed for this program.

Sharing the insights from the campaign, Sujay Dangi – Chief Optometrist & Head Technical Services, Eyewear Division, Titan Company Ltd. said, “Given the rapid advent of technology and influx of numerous gadgets, today, kids are more prone to eye-related problems leading to an exponential rise in the incidences of poor vision among children. The findings are quite a revelation and show the higher rate of visual anomalies in urban areas than the rural areas, showing the importance of keeping the vision of children in check. Being a socially-conscious brand, we introduced Sparkling Eyes Program with an aim to ensure early detection of eye problems in children and generate awareness about eye health of kids in the country. Our intent is to build a generation that has access of good vision and healthy eyes.”

Sparkling Eyes Program by Titan Eyeplus is a unique mission to keep children’s eyes sparkling and healthy for life, ensuring early detection and assessment of the child’s eye-health, leading to correction of some of the key causes of preventable blindness. The program intents to be a platform giving the next generation a boon of improved and healthy eyes.