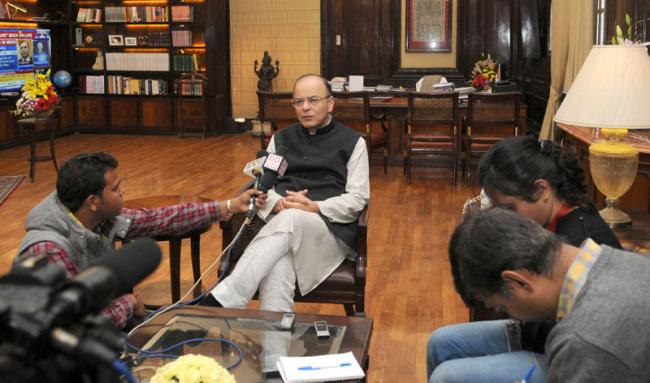 
"The present NDA Government has started overhauling the system. The demonetisation drive currently on, is at a stage where high denomination has ceased to be a legal tender," Jaitley told media.

He said: "It is actually a step in the direction of less cash economy. It's our strategy that from high cash dominated economy we should become a less cash economy where the amount of paper currency comes down. Cash will still exist and there would be a greater digitisation."

"In fact, we see with a sense of satisfaction, a huge movement in favour of digitisation which is taking place. There are obvious advantages of this," he said.

He said the government is attempting to rapidly complete remonetisation exercise.

"Notwithstanding some transient problem which people have to face, we are now rapidly completing remonetisation exercise. Everyday RBI is injecting a large amount of currency into the banking system as part of its remonetisation exercise. Significant amounts are going to be injected in next three weeks which are gradually bringing the pressure down," he said.

Jaitley said: "As more and more new currency comes into circulation, the recirculation itself in the banking system & ATMs will make more currency available."

He said future transaction would be substantially digital.

"Future transaction would be substantially digital and once they are substantially digital, they would come in the tax net. Therefore, the future taxation level would be much higher than what is currently being collected. This would also enable the Government at some stage to make taxes more reasonable which will apply to both direct and indirect taxes," he said.

Attacking the Congress party, Jaitley said corruption scams peaked during the regime of the UPA government.

"The Congress party was in power for 10 years continuously from 2004-14. There were two striking features of that regime. The First that it did not take even a single step either against corruption or against black money. The Second as far as corruption scandals were concerned, it peaked during that period. So from 2G scandal to coal block , CWG, VVIP helicopter Agusta Westland deal, each of the scandals, which is even today discussed in public space, belongs to that period," the Minister said.

He said: "Given this scandalous record, it is not surprising that Congress party is extremely uncomfortable with anti-corruption campaign that the NDA Government led by Prime Minister Narendra Modi has launched."