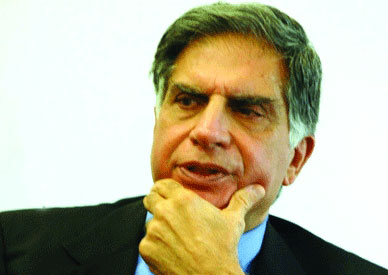 India Blooms News Service | | 25 Oct 2016, 01:57 pm
#Tata Sons, #Ratan Tata, #Cyrus Mistry, #Mistry interview removed from corporate website
Mumbai, Oct 25 (IBNS): Following the removal of Cyrus Mistry as the head of the Tata conglomerate, Ratan Tata, who has taken over the mantle once again, is meeting the group's CEOs on Tuesday at the Bombay House head offce, according to media reports.

The media has also pointed out that an interview of the then chairman, Cyrus Mistry, uploaded on the group's corporate website a month ago, has been removed too.

"In the hours after Mr Mistry's removal was announced on Monday, links and references to him were taken off the Tata website, including the interview, the link for which now leads to a page that reads, "The page you are looking for has been moved or removed," reported NDTV.

The media has also reported that anticipating legal wrangles from the side of Cyrus Mistry and Shapoorji Pallonji, who are also stakeholders in the group, Tata Sons has enlisted professional help from senior advocates such as Harish N Salve and Abhishek Manu Singhvi.

Tata Sons on Monday announced that its board has replaced Cyrus P. Mistry as Chairman of Tata Sons.

The decision was taken at a Board meeting held in Mumbai.

"The Board has constituted a Selection Committee to choose a new Chairman. The Committee comprises Mr. Ratan N. Tata, Mr. Venu Srinivasan, Mr. Amit Chandra, Mr. Ronen Sen and Lord Kumar Bhattacharyya, as per the criteria in the Articles of Association of Tata Sons," read a statement issued by Tata Sons.

"The committee has been mandated to complete the selection process in four months," it read.