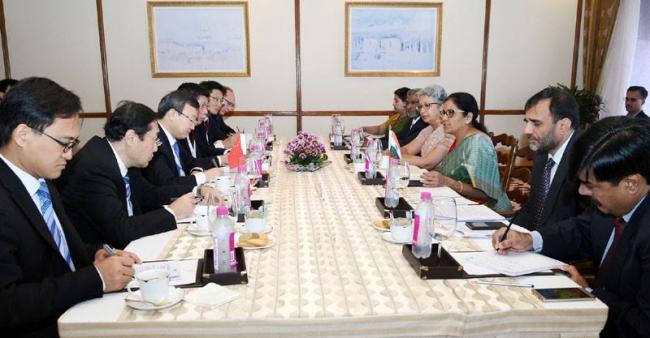 They agreed that the mounting bilateral trade deficit has been a cause for concern for India, which seeks greater market access for its goods for a long-term sustainable trade relationship.

She also requested the Chinese Vice Minister to consider demonstration IT/ITeS projects for Indian companies - which have acquired global acclaim.

She expressed concerns at the long drawn procedures for clearances which tend to frustrate the Indian companies seeking business opportunities in China.

Sitharaman requested for ‘buying missions’ to India to source among other things, Indian tobacco and oil meals.

The two leaders in consonance with the apex level meetings convened by the the prime ministers of both countries agreed that measures on providing greater market access for Indian goods and services in China need a demonstrative action.

The Chinese Vice Minister assured that China would act on the concerns expressed by India regarding market access for Indian goods in the Chinese markets.

He said that recently China has quickened the pace of granting clearances to Indian pharma companies for import of Indian pharma products.

The Chinese Vice Minister said the cooperation of India in the various multilateral fora where China and India are engaged - the RCEP and assured that India’s concerns on a ‘single undertaking’ will be duly taken on board with services being an integral part of the cooperation agreement.