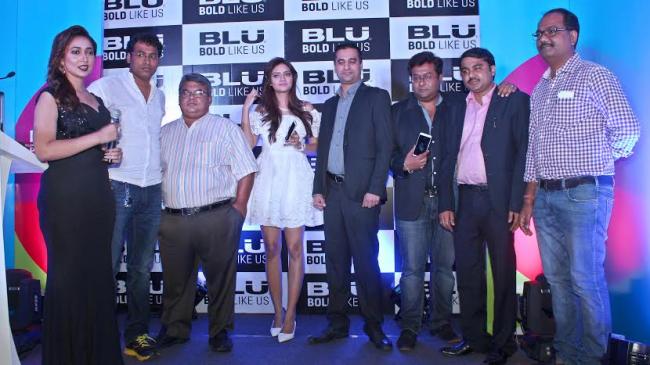 Tollywood actress Nusrat Jahan was present to grace the occasion along with Vikram Anand, National Sales Head, BLU mobile. The mobile phones that were being launched in West Bengal includes 2 dual feature phones, the BLU Diva II  with 2.4 inches display, 240x320 px, Low sharpness, a 0.3 MP Primary camera with LED flash priced at Rs.1699. BLU Tank II priced at Rs.1499, the Tank II is powered by 260MHz and it comes with 32MB of RAM. The phone packs 32MB of internal storage that can be expanded up to 8GB via a micro SD card. It comes with a much powerful 1900mAH battery. The Android category includes BLU Dash J priced at Rs. 2999, Dash L, Studio G HD and the  Life Mark Quad Core, 1.3 GHz MediaTek MT6735 with 2 GB RAM and 5 .0 inches display. It has a 13 MP primary  with LED flash  and 5 MP Front  camera for Rs.10999. BLU Studio One BLU Studio One features 5.0 HD capacitive display, it runs on Android OS, v5.1 (Lollipop) operating system. The device is powered by a Mediatek MT6753 processor paired with 2 GB RAM. The device is priced at Rs.11999. Talking at the launch Vikram Anand, National Sales Head, BLU Products said: “We already had a successful launch in Rajasthan and Gujarat. We offer quality products with unique designs at reasonable rates. Our products will be available both through online and offline stores. Presently we have two offline super distributors in West Bengal under whom we will be appointing 10 micro distributers to cater the retail section.” The company also plans to venture into the north eastern part of the country. “By June we will be launching our products further in the north eastern States of India,” said Anand. BLU Products is an American mobile phone manufacturer founded in 2009 and headquartered in  Miami, Florida. The company known for its budget Android phones while all of its products are designed in BLU's base of USA, these are manufactured in China.   (Reporting by Adit Majumder, Image by Avishek Mitra/IBNS)