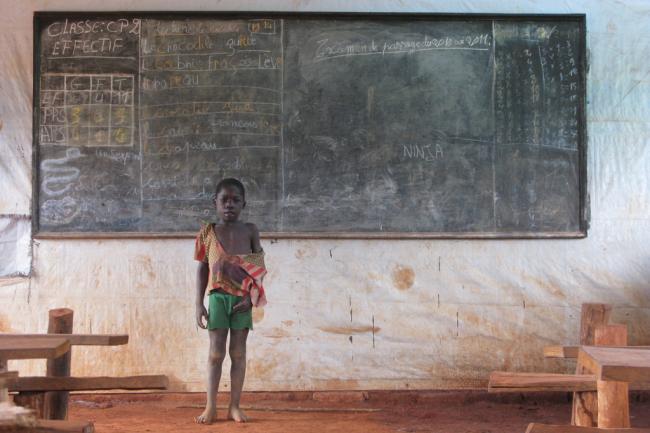 “Present targets are hugely insufficient and diverting attention from the true needs of children and youth on the ground,” said Aaron Benavot, Director of UNESCO's Education For All Global Monitoring Report (EFAGM).

“Surely we can find these funds,” he said. “Most of us carry the cost for one child in our pocket.”

According to the report, 34 million children and adolescents are out of school in conflict-affected countries.

“The most vulnerable are the hardest hit: the poorest are twice as likely to be out of school as their counterparts in peaceful countries,” UNESCO said in a press release on the launch of the 2015 report. “The paper shows that $2.3 billion is required to place them in school – 10 times the amount that education is receiving from humanitarian aid right now.” In 2014, education received only 2 per cent of humanitarian aid.

UNESCO Director-General Irina Bokova said: “Returning to school may be the only flicker of hope and normality for many children and youth in countries engulfed in crises.”

“The Incheon Declaration adopted [in May at the World Education Forum in Incheon, Republic of Korea] by 160 countries commits to meeting the needs of these populations through more resilient, resistive and inclusive education systems and a response to crisis that spans the phases of emergency, recovery and building,” Bokova said. “Education must be seen as part of the first response when crisis hits and an integral part of any peacebuilding strategy.”

According to UNESCO, the the 2014 paper shows that only a third of countries had reached global education goals set in 2000, and identified conflict as one of the major barriers to achieving better results. Today's paper shows the extent of the challenges that conflict presents.

The report also said that media attention unfairly prioritizes some countries over others: more than half of available humanitarian aid to education was allocated to just 15 out of 342 appeals between 2000 and 2014.

It proposes a new, evidence-based finance target, and makes recommendations for tightening the current aid structure for education in crises.

“Any new global emergency education fund should ensure that resources for education in crises are additional, flexible and predictable,” the report said.

Developed by an independent team and published by UNESCO, the agency says thee Education for All Global Monitoring Report is an authoritative reference that aims to inform, influence and sustain genuine commitment towards Education for All.