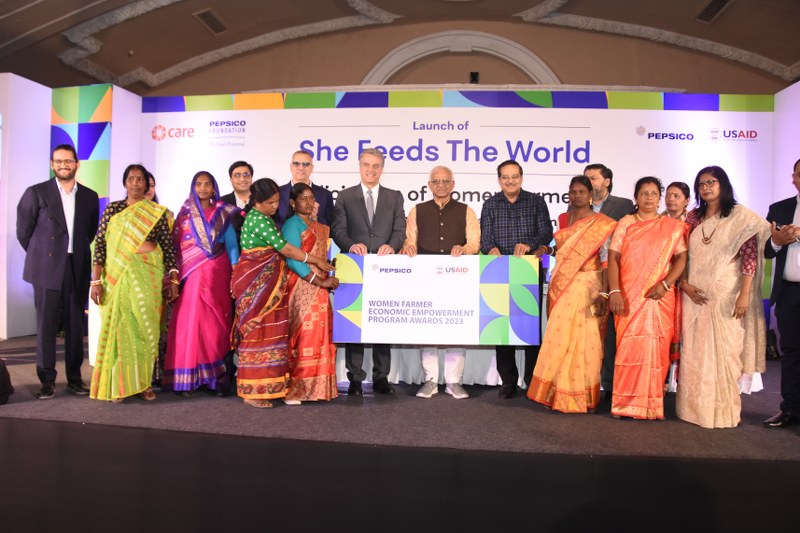 Kolkata: The PepsiCo Foundation, the philanthropic arm of PepsiCo and CARE, a not-for-profit organization dedicated to empowerment for marginalized women and girls, on Tuesday expanded their agriculture-focused ‘She Feeds the World’ programme in India.

Speaking at the event, Roberto Azevêdo, Chief Corporate Affairs Officer at PepsiCo and Chairman of Board of Directors for the PepsiCo Foundation said: "We have a special relationship with India. West Bengal is actually the place where we found a home to establish our first food factory in the country."

"Our actions reflect our strong commitment to the people of India," he said.

"‘She Feeds the World’ project is a key pillar of our pep+ commitment to spreading regenerative agriculture practices and improving the livelihoods of more than 250,000 people in our agricultural supply chain and communities by 2030," he said.

He said the program will further empower women farmers across the region with resources and training.

Ahmed ElSheikh, President, PepsiCo India, said, “We have been working and engaging with women farmers in West Bengal, who have been active participants and are breaking gender stereotypes."

He said: "We are glad to bring ‘She Feeds The World’ to India with CARE, and are confident that such initiatives will further help women farmers build resilient livelihoods.”

The PepsiCo Foundation partnered with CARE to tackle gender inequality in agriculture with the USD18.2 million investment in 'She Feeds the World' programme.

Through the program’s expansion in India, PepsiCo, the PepsiCo Foundation and CARE aim to reach more than 48,000 women, men and children and indirectly benefit 1,500,000 individuals in West Bengal.

Aimed to address gender inequality in the agriculture sector, the program was launched in the presence of Sobhandeb Chattopadhyay, Minister for Agriculture, Government of West Bengal.

Speaking at the event, Chattopadhyay said: "West Bengal has been working towards building social security for farmers. Such joint efforts by industry and communities drive true change and are an effective way of creating much-needed awareness around existing resources and opportunities."

He said the initiative taken by PepsiCo and partners will benefit small-scale women farmers in the state.

Roberto Azevêdo, Chief Corporate Affairs Officer at PepsiCo and Chairman of Board of Directors for the PepsiCo Foundation; Ahmed ElSheikh, President of PepsiCo India; and Puneet Bali, Executive Director, CARE India, were present at the event.

As part of the company’s pep+ (PepsiCo Positive) commitment to Positive Agriculture, ‘She Feeds The World’ focuses on strengthening the role of small-scale women producers through sustainable agriculture training, economic support and by improving linkages, including with the PepsiCo supply chain, to ensure sustainable and stable incomes for the farmer community.

In India, the program will be implemented in the Alipurduar and Cooch Behar districts of West Bengal.

‘She Feeds the World’ will drive impact for women farmers and their families across the three dimensions of a sustainable food system: economic, social and environmental.

At the economic level, it will build capacity for small-scale farmers to improve their cultivation practices, increase yield, and diversify livelihood options to generate more sustainable income.

From an environmental perspective, the project will tackle soil, water, biodiversity and carbon footprint issues to minimize impact on the natural ecosystem.