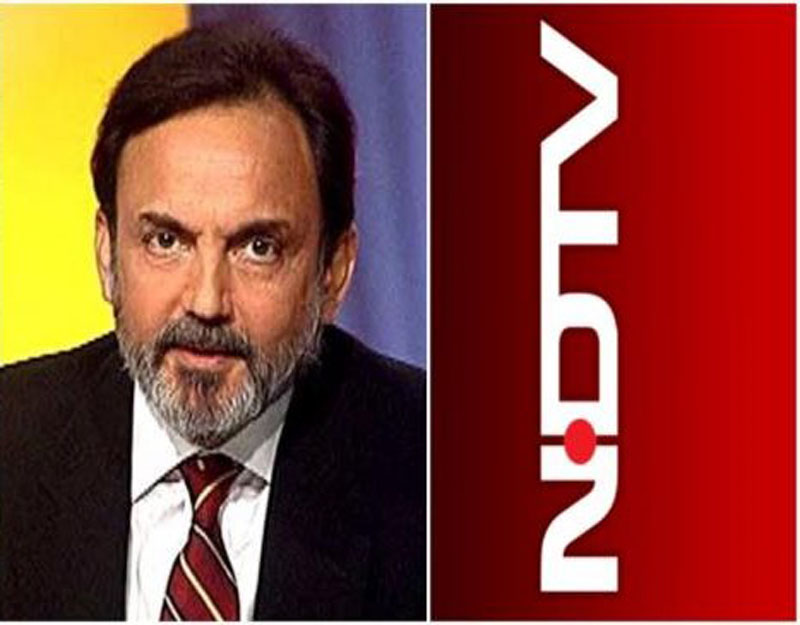 NDTV founders Radhika and Prannoy Roy resign from RRPR board

Mumbai/IBNS: New Delhi Television Ltd (NDTV) founders Prannoy Roy and Radhika Roy stepped down as directors from the board of promoter entity RRPR Holding, with effect from Tuesday, according to an exchange filing by NDTV, a media report said.

Adani also launched an open offer on November 22 for a 26 percent stake in NDTV. The offer will be open till December 5.

VCPL lent Rs 400 crore to NDTV's promoter entity RRPR Holding over a decade ago. That deal had a clause that VCPL could take 29.18 percent of NDTV "at any time".

After the acquisition, the Adani Group announced that AMNL would indirectly acquire a 29.18 percent stake in NDTV and launch an open offer.

It also said VCPL holds warrants of RRPR Holding Private Limited, entitling it to convert them into a 99.99 percent stake in RRPR.

Earlier, VCPL announced that it would launch an open offer on October 17 for buying a 26 percent stake from NDTV's minority shareholders.

But this hit a roadblock as NDTV informed the stock exchanges that neither the media firm nor its founder-promoters were informed about the transaction.

It later said that its promoters Prannoy Roy and Radhika Roy are barred from buying or selling shares or being associated with the securities market. Therefore, Adani Group would need to take approval from the market regulator Securities and Exchange Board of India (SEBI) to complete the transaction.

Adani challenged the stand taken by NDTV to presumably block the deal.

Adani said RRPR was not a party to the SEBI Order dated 27th November 2020 and the restraints as pointed out by RRPR said the order does not apply to RRPR. “The Warrant Exercise Notice has been issued by VCPL under a contract that is binding on RRPR. RRPR is therefore obligated to comply with its contractual obligations.”

NDTV was founded in 1988 and owned by Prannoy Roy and his wife Radhika Roy.