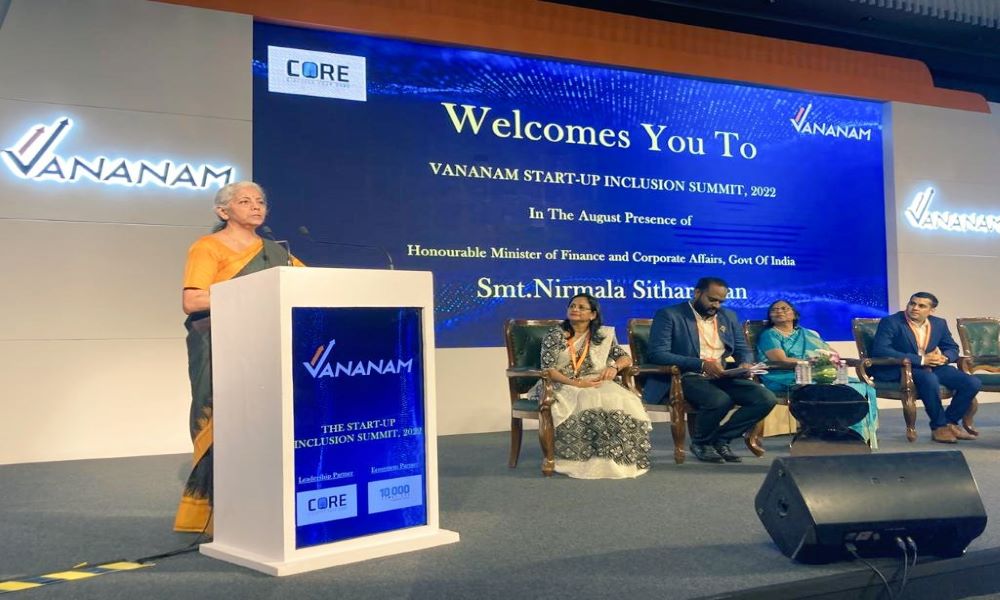 Addressing a national-level summit to promote startups, Sitharaman called on the new-age entrepreneurs to focus on climate change, as it has an effect on the agriculture pattern of the country.

She said the startups are already present in defence production, renewable energy, nuclear, satellites, space technologies, but increased innovations by the startups in tackling climate and climate change are going to be “absolutely precious”.

Sitharaman also emphasised millet production for healthy eating while reminding the gathering that the United Nations has declared 2023 as the International Year of the Millets due to Prime Minister Narendra Modi's efforts.

Smt @nsitharaman addresses the audience at the 'Vananam Start-up Inclusion Summit' on the theme 'Inclusive Growth in the Start-up Ecosystem' during her visit to Bengaluru, Karnataka. pic.twitter.com/QEGmp7FmMT

She told the gathering that Karnataka is a leading producer of millet and value addition by startups can improve the conditions of the farmers growing these crops.

Unpredictable monsoon months are forcing the farmers to rethink their sowing pattern.

Sitharaman said the startups will have to look at innovative ways in which the vagaries of monsoon can be handled.

She pointed out that the rainfall that occurred through the months of the rainy season is now happening in a matter of few days, which no urban or rural planning can handle.

A country like India with a long lineage of good and rich agricultural activity is going to suffer the adverse effects of climate change if not handled well and on time.

The grit and determination of Indian farmers helped India to tide over the Covid-19 situation and the Ukraine War when many countries faced food shortages owing to a decline in farming activity and other issues, the finance minister said.

Appealing to the startups, Sitharaman said the “young minds, energetic minds, restless minds” behind startups should touch on areas where they are still not prominent.

The Finance Minister apprised the audience that India will be chairing the G20 summit.

During the summit one of the meetings will be between finance ministers and central bank governors of the member countries, which will take place in February in Bengaluru, she said.

She exhorted the startups to use every opportunity to the hilt.