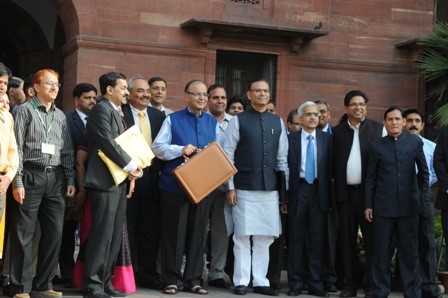 While presenting the union budget for 2015-16 on Saturday, Jaitley said a large proportion of India’s population is without insurance of any kind – health, accidental or life worryingly, as our young population ages, it is also going to be pension-less.

He said soon Pradhan Mantri Suraksha Bima Yojana will be launched to cover accidental death risk of Rs. 2 lakh for a premium of just Rs. 12 per year.

"Similarly, we will also launch the Atal Pension Yojana, which will provide a defined pension, depending on the contribution, and its period. To encourage people to join this scheme, the Government will contribute 50 per cent  of the beneficiaries’ premium limited to Rs. 1,000 each year, for five years, in the new accounts opened before 31st December, 2015," he said.

The Finance Minister also said the third social security scheme is the Pradhan Mantri Jeevan Jyoti Bima Yojana which covers both natural and accidental death risk of Rs. 2 lakhs. The premium will be Rs. 330 per year, or less than one rupee per day, for the age group 18-50.

Jaitley informed that unclaimed deposits of about Rs. 3,000 crore and Rs.6,000 crore were lying respectively with the PPF and EPF. He proposed creation of a Senior Citizen Welfare Fund, in the Finance Bill, for appropriation of these amounts to a corpus which will be used to subsidize the premiums of vulnerable groups such as old age pensioners, BPL card-holders, small and marginal farmers and others.

A detailed scheme in this regard will be issued in March, he said.

Jaitley said special regard needs to be paid to the population of senior citizens in the country which is now approximately 10.5 crore, out of which over one crore are above the age of 80 years. Of these people 70 per cent  live in rural areas and a large number are in the BPL category. A sizable percentage of them also suffer from age related disabilities. The Finance Minister proposed a new scheme for providing Physical Aids and Assisted Living Devices for senior citizens, living below the poverty line.

"In sum, these social security schemes reflect our commitment to utilize the Jan Dhan platform, to ensure that no Indian citizen will have to worry about illness, accidents, or penury in old age," he said.

JaItley also announced that despite constraints, the government remains committed to the ongoing welfare schemes for the SCs, STs and women and allocated Rs. 30,851 crore, Rs. 19,980 crore and Rs. 79,258 crore for them for the year.

The Minister announced an integrated education and livelihood scheme called ‘Nai Manzil’, to be launched this year to enable Minority Youth who do not have a formal school-leaving certificate to obtain one and find better employment.