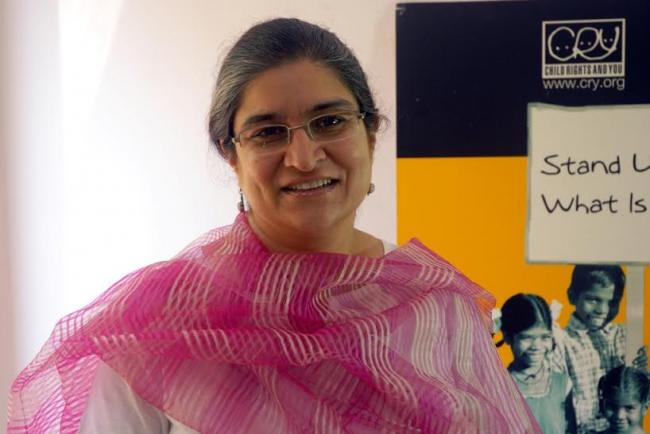 Puja Marwaha, CEO, CRY | | 27 Feb 2015, 11:31 pm
#Uphold child rights, # CRY budget Indian children, # Indian children budget
With just a couple of days for the first union budget of the government, the expectations remain high. It is time for the government to seriously consider child rights indicators and duly prioritize entitlements for children, especially those belonging to the most marginalized groups.

The needs of the children of the nation are paramount, and prioritizing financial resource allocations towards fulfilling these cannot be emphasized enough. Starting from 2012-13, the share of child budget has been marginally decreasing from a high of 4.75 percent (2012-13 RE) to 4.56 percent (2013-14 RE) and now at 4.52 percent (2014-15 BE).

Given that children comprise approx 40 percent of India’s population, the consistently low allocations of below 5 percent of the total Union Budget towards their requirements needs serious reflection and appropriate intervention.

A close look at various child rights indicators illustrates the urgency of the moment. The Right to Education was brought into force in 2010, with specified norms and indicators of school level facilities, infrastructure, and availability of teachers.

While commendable progress has been made in improvement of enrolment related statistics, we are still a long way from meeting the RTE objective of all children in school. An estimated 6.04 million children in the age group of 6-13 are out of school (HRD Ministry, 2014).

According to MHRD RTE 4th year report, the status of infrastructure/ facilities is far behind the third year deadline of the implementation of the Act (March 2013). Even at the end of 4th year, only 85% schools claimed having toilets for girls, 58% schools claimed having a playground, while 62% schools had boundary walls. Over the last three years, Sarva Shiksha Abhiyan (SSA) allocations in fact were approximately 40% of the recommended 12th Plan outlay.

The 5th year milestone of RTE implementation due in March 2015, by which all teachers had to be professionally trained, is clearly foregone. Under SSA, sanctioned teacher posts (till 2012-13) were 19.82 lakh while the number of teachers recruited under SSA was 12.48 lakh (outcome budget, MHRD, 2013-14), with 7 lakh vacancies remaining unfilled. The percentage of teachers without minimum qualifications is stagnating around 20% for last four years. This is ironic in context of the centrality of teachers towards realising the goal of quality teaching and learning outcomes.

With increased levels of primary school enrolment, ensuring vertical transition from primary to secondary education levels becomes crucial. In the 2014-15 budget, allocation for Rashtriya Madhyamik Shiksha Abhiyan (RMSA) was at Rs. 5000 crore (2014-15 BE) in comparison to Rs. 27758 crore for SSA.

Child malnutrition also continues to warrant dedicated public investment. The last comprehensive nutrition statistics available through the NFHS III (2005-06) indicate 48% children under five years of age as stunted i.e. chronically malnourished, and 43% underweight. The continuing spate of child deaths in tribal areas such as Attapadi in Kerala and Baran in Rajasthan in 2014 emits a call for urgent action for universal coverage, access to basic services, and guaranteeing food security of the most vulnerable groups.

Against an overall budget recommendation of Rs. 123580 crore for Integrated Child Development Scheme (ICDS) under the 12th Five Year Plan, only Rs. 50534.5 crore or 40.9% have been allocated in the last three financial years, suggesting a serious shortfall. The government’s election manifesto and the 2014-15 Union budget had expressed an intent in this context through announcing a comprehensive national malnutrition mission, with strategies, finances and timelines to be worked out within six months. Now is the time for presenting its seriousness in taking forward the challenge of eliminating malnutrition in India.

The introduction of the Integrated Child Protection Scheme (ICPS), the Government’s flagship scheme on child protection, in 2009 has not made a significant impact. Incidents of child protection violations, such as missing children, trafficking, sexual abuse, corporal punishment, etc have increased in recent years, leading to heightened awareness of infrastructural gaps, systemic loopholes and the non existence of quality counseling and support services for children.

A close look at allocations in ICPS, indicates stagnation at Rs. 258.46 crore (2012-13 RE), Rs. 270 crore (2013-14 RE) & Rs. 400 crore (2014-15 BE) against recommended 12th Plan outlay (annual) figure of Rs. 1060 crore. The expectation, therefore, from the upcoming budget is for re-prioritizing investments towards developing a robust child protection system, with the capacity to provide emergency immediate care, crisis support and long term rehabilitative services to children.

Given the urgency and enormity of even these few issues mentioned above, CRY is hopeful that the government should gear towards a positive increase in the Union Budget 2015-16, and allocate at least 10% of Union Budget for children.


This article is authored by Puja Marwaha, CEO, CRY - Child Rights and You