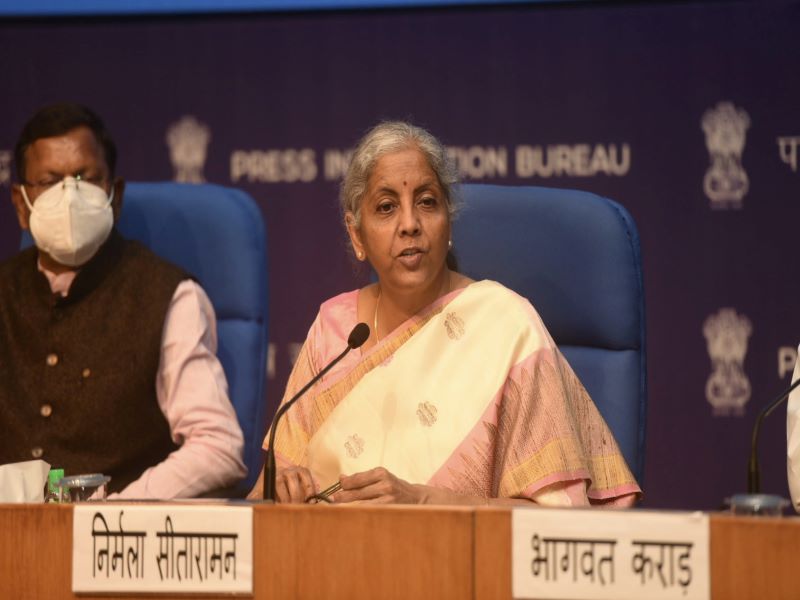 New Delhi: A few days after former RBI Governor Raghuram Rajan and ex-NITI Aayog Vice-Chairman Arvind Panagariya dismissed concerns over the possibility of India facing a Sri Lanka-like economic crisis, Finance Minister Nirmala Sitharaman Tuesday told Rajya Sabha the rupee's fall against the USD was not alarming and the unit has performed better than its peers.

"We have withstood the impact of the US Fed's decisions much better than any other peer currencies," she told the house.

The finance minister said the RBI is continuously monitoring the local currency and intervening only if there is volatility.

"The RBI interventions are not so much to fix the value of the Indian Rupee because it is free to find its own course," the minister told the Rajya Sabha during Question Hour.

Answering the supplementaries she said the intervention by RBI is more for controlling the fluctuations between the Indian rupee and the US dollar.

"Even the interventions being made by RBI are not so much to determine the value - increase or decrease, of the Indian rupee. It is not for that. It is more to avoid the volatility and allow it to find its course.

"India, like many other countries, is not pitching its currency at a level extraneously. So the ways and which we want to strengthen... the RBI and the Ministry are fairly engaged in it," she said.

"So, I want the house to take into cognizance the Indian rupee's performance versus others, whether it is the UK Pound and so on and contextualise the performance of Indian rupee versus the US, particularly because of the steps that are being taken by the US Fed," she told the Rajya Sabha.

"There is no collapse. It is actually finding its natural course. The RBI is continuously monitoring it and intervening only if there is volatility. RBI interventions are not so much to fix the value of the Indian rupee because it is free to find its own course," Sitharaman stated.

Her response to Rajya Sabha comes days after RBI governor Shaktikanta Das had said that the Central bank wouldn't tolerate volatile and bumpy movements while underscoring that it had no particular level of the rupee in mind.

“Due to the RBI actions, including measures to encourage inflows, the movements of the rupee have been relatively smooth and orderly. By eschewing sudden and volatile shifts, we have ensured that expectations remain anchored and the forex market functions in a stable and liquid manner,” Das said.

The RBI will continue to engage with the forex market and ensure that the rupee finds its level in line with its fundamentals. Das reiterated that the central bank has no particular level of the rupee in mind, but would like to ensure its orderly evolution. “…we have zero tolerance for volatile and bumpy movements,” he had said.

He had said that RBI had been supplying US dollars to the market to ensure there was adequate forex liquidity, the very reason for which reserves had been accumulated.

Like Sithraman, Das had also said that the rupee had been holding against the dollar up well relative to both advanced and emerging market peers and maintained that India's foreign exchange reserves were adequate.

On Tuesday, responding to the questions on forex reserves coming down, Finance Minister Nirmala Sithraman also said that India's foreign reserves stood at USD 571.56 billion reserves as of July 22, which was not a small amount and India was comfortably placed.

We have sufficient foreign exchange reserves. RBI has done a good job in increasing the reserves. We are not having problems like Sri Lanka and Pakistan. Our foreign debts are also less, Rajan said.

Foreign currency assets (FCA) are maintained as multi-currency portfolio always valued in US dollar terms and include major currencies, such as, the US dollar, Euro, Pound sterling, Japanese yen, etc.

India's foreign currency assets are the biggest component of the forex reserves. Any changes in the values of these currencies affect the value of FCA.

There was an increase in other components of the forex reserves.

The value of India's Special Drawing Rights (SDRs) with the International Monetary Fund improved by $106 million to $17.963 billion during the week under review, the RBI data showed.

India's reserve position in the International Monetary Fund (IMF) rose by $23 million to $4.96 billion during the week ended July 22, according to the RBI Weekly Statistical Supplement.

The Reserve Bank of India's hike in policy rates would help control the inflationary pressure, Rajan said while noting that the global economy is hit by inflation.

The major drives of inflation are food and fuel, he said adding that India would see a drop in inflation as food inflation is coming down in the world.

Former NITI Aayog Vice-Chairman Arvind Panagariya a professor of economics at Columbia University said in an interview given to the media that said since the 1991 balance of payments crisis, all the governments have dealt with the macroeconomy conservatively.

He pointed out that in the case of India, fiscal deficits have not been allowed to get out of hand.

The exchange rate has been allowed to depreciate to keep the current-account deficit low, monetary policy has been tightened to keep inflation low, and the opening of financial capital flows has been allowed sparingly.

Panagariya said it was preposterous to say that the Indian economy would be like the Sri Lankan economy pointing out that India has been rarely dependent on external borrowings to finance its fiscal deficit.