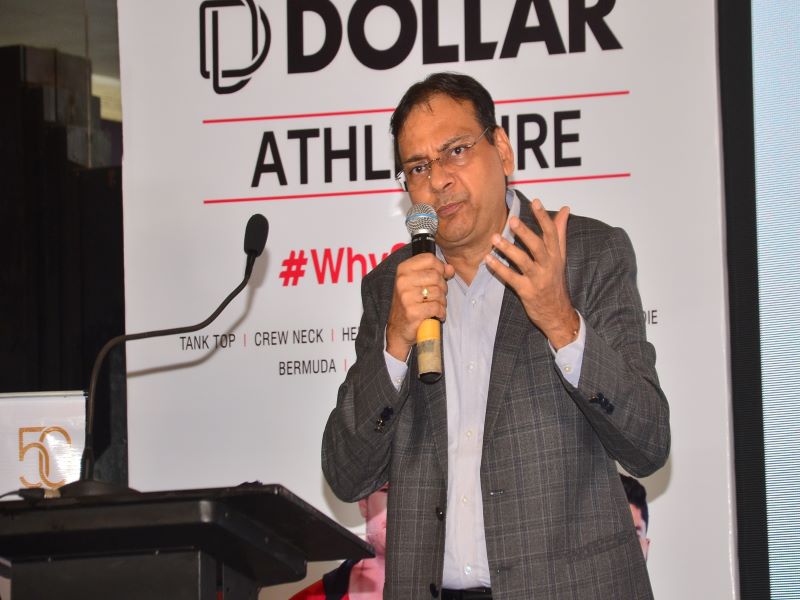 The company has set a target turnover of Rs 2,000 crore by March 2025 from Rs 1,360 crore in Fy22, he said, adding that the growth target will be supported by new launches, said Dollar Industries MD Vinod Kumar Gupta at a press conference.

"We are continuously expanding our product bouquet to maintain the growth momentum so that we achieve this target easily," he said.

The hosiery maker, which holds 15 percent of the market share, launched a special logo to mark the completion of 50 years. Bollywood star Akshay Kumar is the current brand ambassador of Dollar men's innerwear range.

Sharing the roadmap of expansion till 2025, Gupta said Dollar would be adding one more spinning mill in Tamil Nadu's Dindigul.

"We are doubling our spinning capacity in Dindigul as we already have space to multiply up to five times," he said.

This additional capacity will be done at a cost of Rs 60 -65 crore and will be completed by the end of Fy23.

Gupta said the company has added Kurti and brassiere under its Dollar Woman category this year and received a good response so far. The company makes women's leggings under the brand name Dollar Missy for which Bollywood actor Yami Gautam is the brand ambassador.

Dollar also plans to open 25-30 Exclusive Brand Outlets (EBOs) this financial year and aims to increase this number to 125 by March 2025, mostly in Tier I and Tier 2 cities.

"The integrated warehouse is likely to fetch us one to two percent of additional profits annually because of the economies of scale," he said.

It will generate employment for three to four hundred people, Gupta said

This warehousing facility will act as centralised despatch centre easing out logistics, enhancing economies of scale, rationalisation of staff and output and facilitating faster delivery, he said, listing the benifits.

Asked about setting up a spinning mill in Bengal, Gupta said Dindigul is a spinning hub and offers multiple advantages,

"We have spoken to Chief Minister Mamata Banerjee and the ministry of industry for support in this regard," he said.

A new knitting unit will be set up at Tirupur in Tamil Nadu as part of the expansion plan.

Currently, the company's manufacturing capacity is three lakh pieces per day but it will increase production in all four locations, including Kolkata suburbs, Tamil Nadu, Delhi and Ludhiana.

The Kolkata unit makes vests, briefs and trunks, kurtis, and leggings. "We are expanding our production network in West Bengal and warehouse in Jadishpur is part of the plan," Gupta said.

Dollar Industries said it has a 4 MW solar power plant and its capacity will be enhanced to 6 MW.