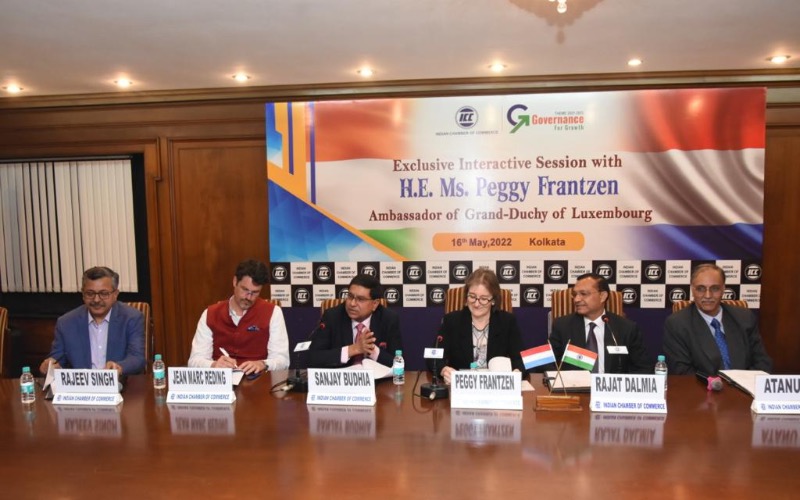 Kolkata/IBNS: The Ambassador of the Grand-Duchy of Luxembourg Peggy Frantzen highlighted green finance, space, Artificial Intelligence (AI), and health as potential areas of collaboration with India.

Peggy Frantzen said at an event in Kolkata, "Green finance, AI, space and health are potential areas for collaboration and can also compensate for the impact of inflationary pressures."

With respect to innovations, she said, "Luxembourg will open up a health and life science innovation campus in 2024."

Currently in the health sector, 130 companies are functioning in Luxembourg with some of them specializing in critical health, medical devices and diagnostics.

These companies will also open research and development sections that will look into productions and distribution activities, she said.

West Bengal is also active in the health sector, therefore, it's a possible segment for the eastern Indian state to explore with our country, she added.

The bilateral trade between the South Asian giant and Luxembourg stood at USD 52.69 million.

Over the years, India mainly exports engineering products, textiles and garments, and chemicals to Luxembourg, while importing engineering goods, base metals, plastics and articles.

During an interactive session hosted by Indian Chamber of Commerce (ICC), Frantzen said, "Our priorities currently should be the trade between the financial sector and the innovative sector."

On the startup front, Senior Consul at the Embassy Of Luxembourg Jean Marc Reding said, "Our Fit for Start, a startup acceleration programme in Luxembourg, provides six months of coaching and mentoring by a diverse set of industry experts.

"It also provides funding totalling Rs 1.2 crore and access to a free coworking space in Luxembourg.

"We are looking for Indian startups focusing on innovation, space, health and tech sector to become a part of this programme."

On the travel industry side, Frantzen said, "Luxembourg intends to host thousands of tourists every year from India but due to covid and other reasons have taken a hit. But we hope to work out on the issue at the earliest."

Coming to the flow of Foreign Direct Investment (FDI) from Luxembourg to India, in the period between April 2000 - Dec. 2020 it stood at USD 3.339 billion, making the European nation the 16th largest investor in India, the official release said.

Presently, about 17 Luxembourg companies are operating in India.

In another significant aspect of economic relations between both countries, the Luxembourg Ambassador to India said 79 Indian companies have raised capital by issuing Global Depositary Receipts (GDRs) at the Luxembourg Stock Exchange.