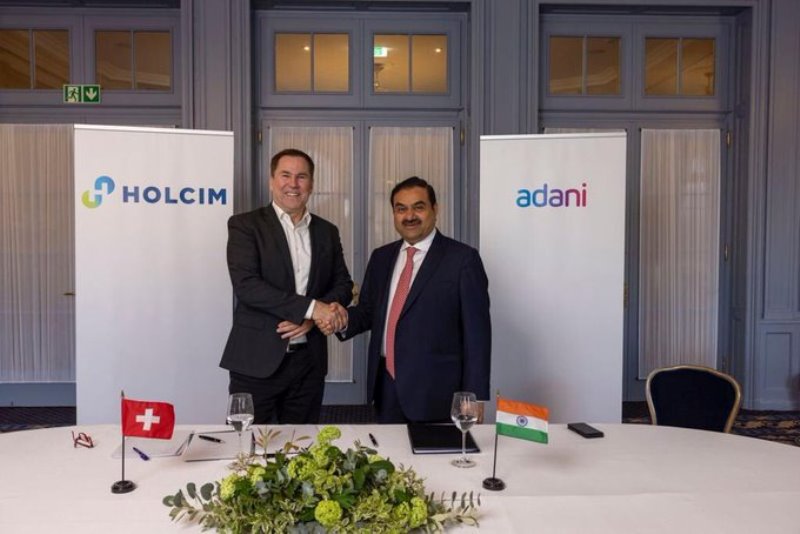 Gautam Adani-led Adani Group has acquired Holcim's stake in Ambuja Cement and its subsidiary ACC at a price tag of $10.5 billion (around Rs 81,361 crore).

A day after the announcement, the shares of Ambuja Cements and unit ACC appreciated 2.9 percent and 6.4 percent, respectively, on Monday.

At present, Aditya Birla group, which owns the brand ultra tech cement, is India's top cement producer at a capacity of 117 metric tonnes per annum.

Aditya Birla Group was also in the race to buy Holchin's stake after the company announced its exit from India.

However, Asia's richest man Gautam Adani's group bagged the deal on Sunday which is being sen as a major win for the conglomerate.

After the expansion, Adani has become India's second-largest cement manufacturer, with a capacity of 70 metric tonnes per annum.

"Our belief in the India story is unshakeable. Combining @Holcim's cement assets in India with our green energy and logistics will make us the world's greenest cement company. Jan Jenisch has been terrific to work with. We welcome the @AmbujaCementACL & @ACCLimited teams," Adani Group Chairman Gautam Adani said in a tweet after the announcement.

Our belief in the India story is unshakeable. Combining @Holcim's cement assets in India with our green energy and logistics will make us the world's greenest cement company. Jan Jenisch has been terrific to work with. We welcome the @AmbujaCementACL & @ACCLimited teams. pic.twitter.com/iThyLp92iV

Holcim has said it plans to focus on the group's 'strategy 2025' aimed at developing sustainable solutions for the building materials sector.

However, it is being said that intense scrutiny of its operations in India by the Competition Commission of India (CCI) triggered its exit, especially after the anti-trust watchdog launched a second investigation against the company in 2022.

"Our move into the cement business is yet another validation of our belief in our nation's growth story," said the Chairman of the Adani Group said.

"Not only is India expected to remain one of the world's largest demand-driven economies for several decades, but India also continues to be the world's second-largest cement market yet has less than half of the global average per capita cement consumption. In statistical comparison, China's cement consumption is over 7x India's," said Adani.

"When these factors are combined with the several adjacencies of our existing businesses, include the Adani Group's ports and logistics business, energy business, and real estate business, we believe that we will be able to build a uniquely integrated and differentiated business model and set ourselves up for significant capacity expansion," he added.