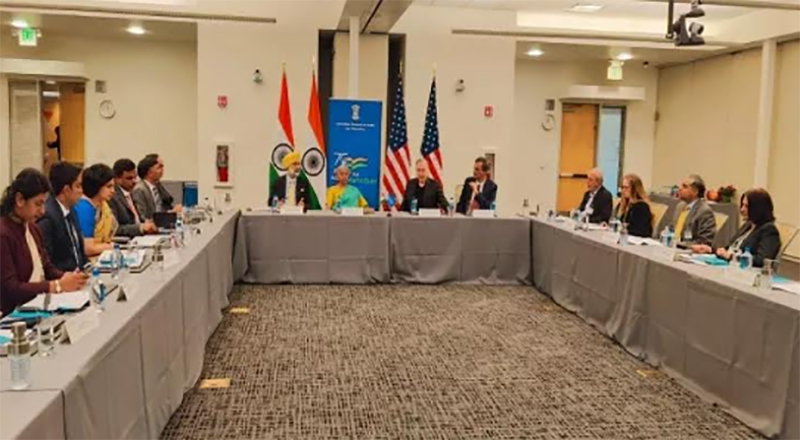 FM Sitharaman woos investors in US, urges them to become part of India's growth story

New Delhi/San Francisco/UNI: On an official visit to the US, Union Finance Minister Nirmala Sitharaman on Tuesday attended a roundtable meeting with business leaders and investors in San Francisco and invited them to become part of India's growth story.

She told the participants that India is likely to remain the world's fastest-growing major economy over the next few years.

As per the Finance Ministry, the roundtable was attended by senior executives, private sector business leaders, venture capitalists, institutional investors, and representatives of pension and endowment funds, representing combined assets under management of over $1 trillion.

Widmar informed the Minister that the First Solar plant in India will be operational shortly and this is their lowest-cost factory across jurisdictions with very low carbon footprint and recycles 90% of the material.

Widmar emphasised that due to the climatic advantages available to India and the government's push through PLI (production-linked incentive), India is sure to emerge as a global player in PV (photovoltaic) manufacturing.

Ahead of her roundtable meeting with representatives of the semiconductor industry, Sitharaman visited Applied Materials' Maydan Technology Centre in Silicon Valley to witness firsthand research in the field of semiconductors.

During the roundtable with industry leaders from the Semiconductor ecosystem, including design, manufacturing, equipment, technology and systems, Sitharaman spoke of the opportunities for companies situated in Silicon Valley for the entire semiconductor value chain and government's commitment to be a reliable player in the entire value chain with dedicated incentive for the sector.

Sitharaman visited the headquarters of Bloom Energy in San Jose, California where company CEO K.R. Sridhar apprised the Finance Minister of the latest developments and advances in clean energy.

Sridhar informed the Minister that a large number of the components in generators are manufactured in India, thereby furthering the Make in India initiatives of the government.