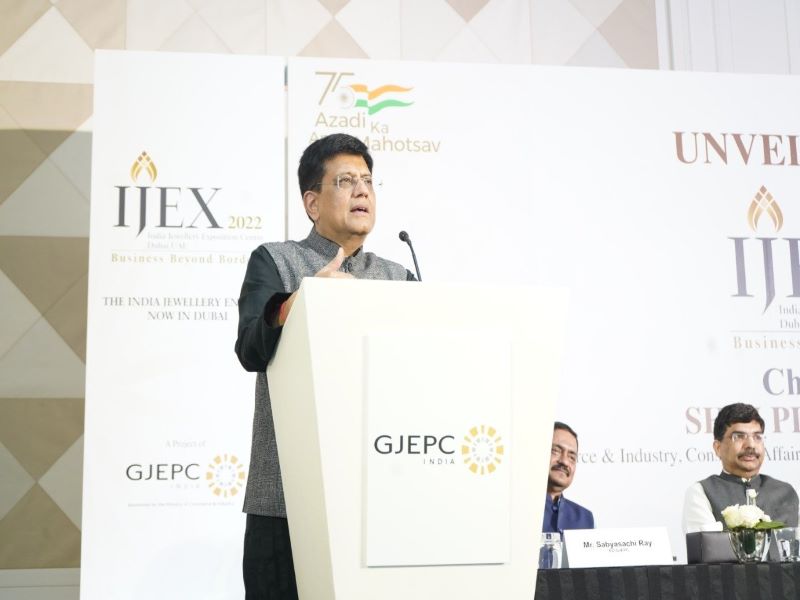 Dubai: The gems and jewellery industry should look to triple their exports target from about $35 billion exports at present to go for $100 billion target worldwide, Union Commerce & Industry minister Piyush Goyal said Tuesday.

Prime Minister Narendra Modi has always focused on the gems and jewellery sector and aims to make India the top player in the world in the sector of not only the "Made in India" but also "Designed in India jewellery".

Addressed the inaugural ceremony of the Indian Jewellery Exposition Centre in Dubai.

PM @NarendraModi ji aims to make India No. 1 in the world in Gems & Jewellery sector of not only the ‘Made in India’ but also ‘Designed in India’ jewellery.

“I am sure this Centre will also play an important role in helping us meet very, very ambitious target in our India-UAE business engagement and will serve as a global business touch-point to give our produce to international countries across the world from the UAE,” said Goyal in his address during the inaugural ceremony of the Indian Jewellery Exposition Centre in Dubai.

The #IndiaUAECEPA which comes into force from May 1 is a great signal for the Gem & Jewellery sector. The sector has contributed nearly 10% to India's $400 bn goods exports.

Stating that in the Vishnu Purana there is a description of ‘Syamantaka’ gem, which had the power to bring prosperity and plentitude to the possessor, Goyal said jewellery has been part of our culture and tradition and represents as a symbol of style and status in the society.

The G&J sector, at about $35 billion exports, contributed to nearly 10 percent of over $400 Billion exports target India scaled this financial year.