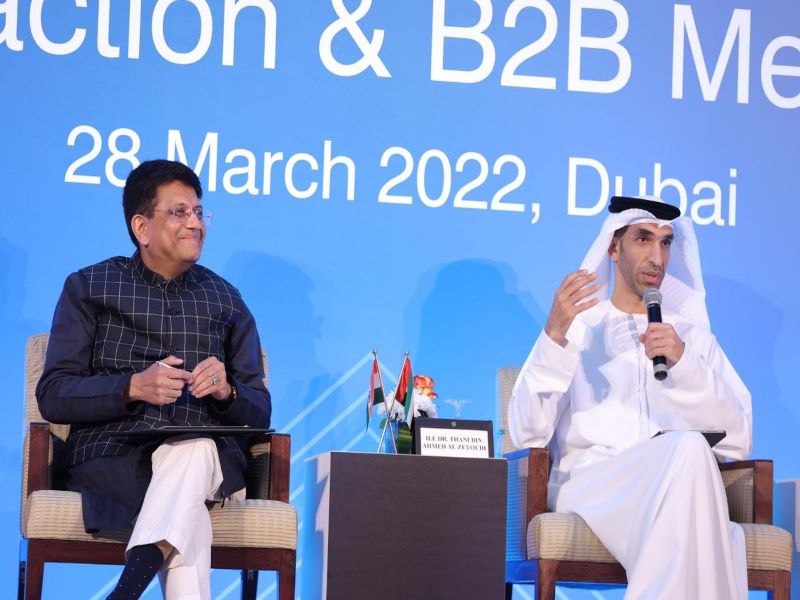 India-UAE CEPA will be operationalized on May 1: Piyush Goyal

Addressing a Business-to-Business (B2B) meet with the UAE Minister of State for Foreign Trade Thani Al Zeyoudi on India-UAE CEPA in Dubai on Monday, he said the historic deal sets the tone for new beginnings, extraordinary outcomes & a paradigm shift in our trade ties.

Goyal said India looks to UAE as a gateway to Africa, other GCC and Middle Eastern countries, CIS countries and some European countries.

“This significantly opens the doors to significant markets all over the world. So when we set out to engage with each other, we were not engaging with a 10 million population in the UAE, I had in mind, and both of us had in our vision, the much larger engagement that this CEPA is going to offer to businesses on both sides”, said Goyal.

It was a pleasure addressing the B2B meet on #IndiaUAECEPA along with UAE Minister of State for Foreign Trade H.E. @ThaniAlZeyoudi.

The historic deal sets the tone for new beginnings, extraordinary outcomes & a paradigm shift in our trade ties. 🇮🇳🇦🇪

Goyal said the India-UAE CEPA, covering Merchandise Trade and Services, has many first to its credit including the fact that the trade pact was sealed in a record short time span of 88 days.

“And this Agreement is not about Trade alone, it’s not about trade in Goods and Services alone; I think it has a huge geopolitical, economic and also, in some sense, a great human element given the huge presence of the Indian Diaspora in the UAE,” said Goyal.

Goyal termed the India-UAE Partnership as the “defining strategic partnership of the 21st century”.

This agreement gives a new direction, a paradigm shift to this relationship, he said.

India wants a larger share of the UAE market as New Delhi sets its eyes on achieving $1 trillion goods exports by 2030, he added.

“With the growing role of Services, in both the economies, I think that will also give a big thrust to our bilateral engagement in the years to come,” he said.

Goyal said the UAE has made commitments about their interest to invest in Indian Infrastructure, Manufacturing & Logistic sector. A huge delegation of UAE entrepreneurs recently visited J&K too.