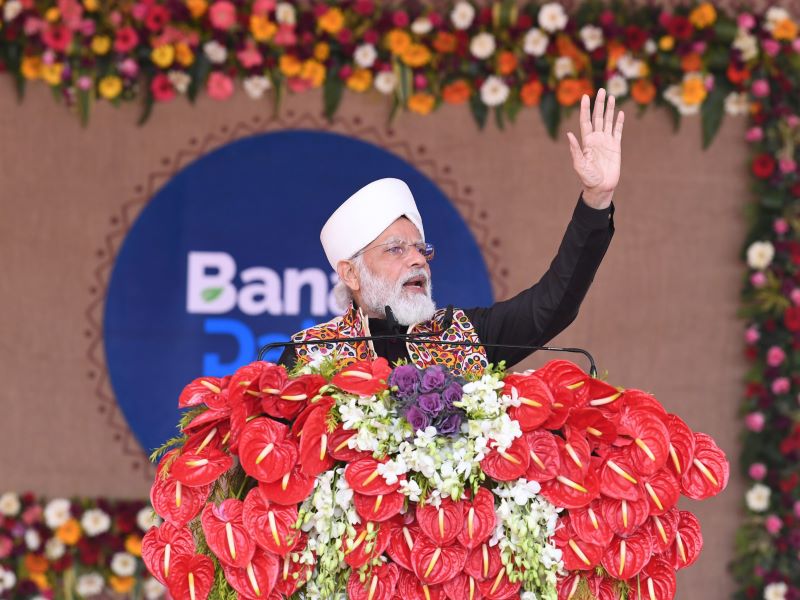 Spread across 30 acres of land, the dairy will be built at a cost of about Rs 475 crores and will have a facility for processing 5 lakh litre of milk per day.

PM Modi also unveiled a Portal and Logo dedicated to the Conformity Assessment Scheme of milk products, developed by the Bureau of Indian Standards (BIS) with the help of National Dairy Development Board (NDDB).

In another effort to reduce the land ownership issues at grassroot level, the Prime Minister virtually distributed the rural residential rights record ‘Gharauni’ under the Swamitva scheme of the Union Ministry of Panchayati Raj, to over 20 Lakh residents of Uttar Pradesh.

The programme also witnessed the Prime Minister inaugurating and laying the foundation stone of developmental projects worth over Rs. 1500 crores in Varanasi. This will further strengthen the ongoing 360 degree transformation of Varanasi.

Chief Minister, Uttar Pradesh, Yogi Adityanath and Union Minister Dr Mahendra Nath Pandey were among those present on the occasion.

Addressing the gathering, the Prime Minister paid tribute to former Prime Minister Chaudhary Charan Singh on his birth anniversary, which is celebrated as Kisan Diwas.

Underlining the importance of livestock, he said “talking about cows can be a crime for some people, cows are revered as mothers by us. People who make fun of cow-buffalo forget that the livelihood of 8 crore families of the country is run by such livestock.”

He added “strengthening India's dairy sector is one of the top priorities of our government. In this series, the foundation stone of Banas Kashi Sankul has been laid here today.” He also talked about the nationwide immunisation programme for foot and mouth disease among cattles.

The milk production in the country has increased by about 45 percent as compared to 6-7 years ago. Today India produces about 22 percent of the world's milk.

“I am happy that today UP is not only the largest milk producing state in the country, it is also significantly ahead in the expansion of the dairy sector,” the Prime Minister said.

The Prime Minister expressed his firm belief in the role of the dairy sector, animal husbandry and the new push in white revolution in transforming the lives of farmers.

Firstly, he said, animal husbandry can become a huge source of additional income for the small farmers of the country, whose number is more than 100 million.

Secondly, India's dairy products have a huge market abroad, in which there is a lot of potential to grow.

Thirdly, said the Prime Minister, animal husbandry is a great way for the economic upliftment of women, to further their entrepreneurship.

The fourth is that livestock is also a big basis for biogas, organic farming and natural farming.

The Bureau of Indian Standards has issued a unified system for the country.

An integrated logo featuring Kamdhenu cows has also been launched for certification. If this proof, this logo is visible, then the identification of purity will be easy and the credibility of India's milk products will also increase, the Prime Minister emphasised.

“For the rejuvenation of mother earth, to protect our soil, to secure the future of the coming generations, we must once again turn to natural farming. This is the need of the hour today,” he said.

The Prime Minister appealed to the farmers to adopt natural farming and organic crops. He said that this will go a long way in making our agriculture AtmaNirbhar.

He virtually distributed the rural residential rights record ‘Gharauni’ under the Swamitva scheme of the Union Ministry of Panchayati Raj, to over 20 Lakh residents of Uttar Pradesh. He said this will open new vistas of development and dignity for rural poor and will make them part of the development growth story.

He said Varanasi is fast turning into a model of development. New projects are bringing unprecedented ease and convenience for the people of Varanasi. He said. Projects inaugurated and started today will further strengthen the health, education and infrastructure related image.

The Prime Minister said that people who have viewed the politics of Uttar Pradesh from the prism of caste, creed, religion get upset by the talk of double power of double engine.

Further, residential flats and staff quarters at BHU and ITI Karaundi were also inaugurated by the Prime Minister.

He inaugurated a 50 bed Integrated Ayush Hospital at Bhadrasi. He also laid the foundation of Rs 49 crore Government Homoeopathic Medical College in tehsil Pindra under the Ayush Mission.

In the road sector, the Prime Minister laid the foundation stone of two ‘4 to 6 lane’ road widening projects for Prayagraj and Bhadohi roads. This will improve connectivity of Varanasi and will be a step towards resolving the problem of the city's traffic congestion.

To give fillip to the tourism potential of the holy city, the Prime Minister also inaugurated the Phase-1 of Tourism Development project related to Shri Guru Ravidas Ji Temple, Seer Govardhan, Varanasi.