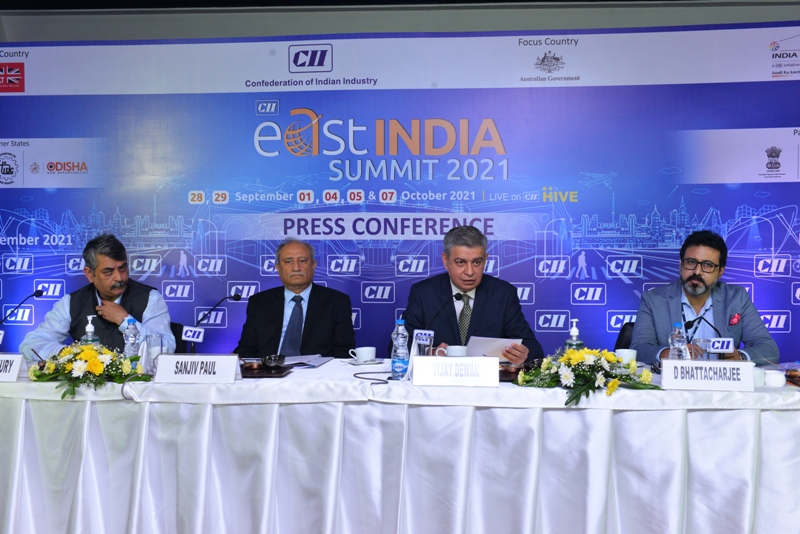 Kolkata/IBNS: The Confederation of Indian Industry on Friday said the East India Summit 2021 scheduled from Sept 28 will focus largely on a sustainable infrastructure roadmap for the east and northeast states with emphasis on railways, aviation, and future mobility.

Speaking at a pre-event press conference ahead of the first ever East India Summit 2021, scheduled from Sept 28 to Oct 7, Vijay Diwan, Chairman CII Eastern Region said: "Development means that real-estate players will play a leading role and it also means to develop roads and new airports. Our   focus is to see the building of new cargo terminals in metro and as well as in tier 2 and tier 3 cities."

CII is organising the first East India Summit virtually, bringing together 6 countries and states of east & Northeast to deliberate on infrastructure investment opportunities.

The CII theme for 2021-22 is ‘Building India for a New World: Competitiveness, Growth, Sustainability, Technology.’ - which would essentially aim towards bringing the entire ecosystem work in partnership.

Diwan said there will also be an opportunity for airports and even ports to monetize and provide large scale employment in the eastern and north eastern states which generally get neglected.

On the rural India housing front, Saikat Roy Chowdhury, Regional Director, CII East & North East, said, "A lot of multilateral agencies are taking part and bringing funding options and developmental projects which they run with a focus on the east and northeast region."

"There is a massive push for low-cost technology for housing which can be easily set up in rural areas meaning growth and employment for them.  But all this comes when infrastructure reaches there like port terminals, land terminals and airports that together can bolster growth."

The potential for West Bengal to be a leader in logistics within the entire eastern region was also realised as a serious possibility with emphasis on freight corridor, ports and aviation infrastructure.

"The presence of key personalities like Amitabh Kant, CEO Niti Aayog, and partner countries- France, Bangladesh, Japan, Germany, South Korea, Nepal and the U.S. (for the summit) only adds up to the importance of the discussion which could open future doors to near future collaboration and investment," he said.

Sanjiv Paul, Deputy Chairman CII for the eastern region, who is positive on the New Infrastructure Pipeline (NIP) vision, said, "The private sector will have to invest seven and a half lakh crore per annum to achieve the 1 trillion target by 2025."

Nick Low, British Deputy High Commissioner to Kolkata, focused on the need for sustainable development and factor in climate change while adding that the UK is looking ahead to bring experts in the field to help India.

"Uk hopes to achieve the target of zero greenhouse gas emissions by 2030," he said.

Sanjiv Paul, who is also Vice President of Tata Steel, said there was a need for the developing world to resolve the climate change problem and saw the UK leading from the front.

CII in the eastern region will be assimilating the national theme for the summit and dovetail it to focus on key growth areas that are critical for the growth in the region.

CII would be focusing on integrating the growth potential of the five states comprising Bihar, Chhattisgarh, Jharkhand, Odisha and West Bengal and channelize the strengths of the region towards “Building Eastern India” through integrating the 5 “I”s – Image, Innovation, Infrastructure, Investment and Inclusiveness.

In the build up to the East India Summit, CII  said it is looking at the overall development of Eastern India, and focused on the North Eastern Region, as a major growth area for the Nation.

"There has been enormous traction and interest from the States of Assam, Nagaland, Mizoram and Tripura. To bring a Global focus in the East, CII will work on building a new image – an image that would place it as a location for growth, industry connect, investment, ease-of-doing-business and connectivity.

"We are looking to position the region by tackling the key parameters of creating awareness; centre/state relations and set in motion the business cycle for creating a strong ecosystem as the hub of future entrepreneurs," the CII officials said.

CII said it would promote the possibility of the region as the Hub for business and economic growth in the country and also act as a key catalyst for inviting funding agencies, investment banks, multilateral banks, development banks, angel funds etc. to link up with the hitherto untapped natural and demographic resources of the East.