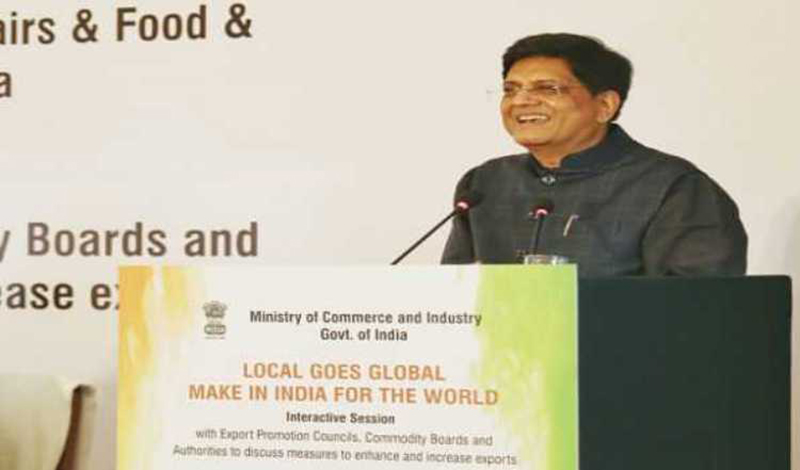 New Delhi/UNI: Asking industry to provide their inputs for the trade pact with Australia, Commerce and Industry Minister Piyush Goyal on Thursday said that he expected an 'early harvest' pact with the country.

Under an early harvest arrangement, trading partners significantly reduce or eliminate customs duties on a limited number of goods in order to promote and expedite bilateral trade.

"Australia has demonstrated the highest level of engagement, highest level of commitment and has agreed for an 'early harvest'. So, I would urge all of you to quickly assess which are the areas where we can finalise the early harvest with Australia. What are the areas of your interest? What are the areas where you can let go a little bit and on a two-way basis or give and take we can then try and close Australian engagement," he said while addressing the chiefs of various export promotion councils.

He noted that once the early harvest agreement with Australia is concluded,  Free Trade Agreements (FTA) with other developed countries would get expedited as they would happen on similar lines.

Sharing progress on FTA's with various developed countries, the Minister informed that India is at a very positive momentum in terms of trade agreements with the UK, EU, Australia, Canada, UAE, Israel and the GCC countries.

“Our effort is to ensure focus on countries where we have significant potential, where we can compete better and where market size is significant,” he said.

Goyal said the government is looking at identifying areas of immediate interest for India and the UK and concluding an 'Early Harvest Agreement' with the UK.

On the FTA with the EU, the Minister stated that it is only due to the Prime Minister's goodwill and credibility that the EU has agreed to once again engage in negotiations for an FTA.

“If the FTA with UAE happens, FTAs with GCC countries too will get expedited. The USA has kind of indicated that they are not looking at new trade agreements, however, we will work with them to address market access issues on both sides, this will be a big opportunity for our export sector," he added.

Goyal reiterated that the government would ensure the FTAs are fairly and equitably crafted, bringing more elements of reciprocity.

"But at the same time I do hope and you all will appreciate that FTA cannot be one-way traffic. We will also have to open our markets to others if we are wanting a larger pie in their market," the Indian minister stated.