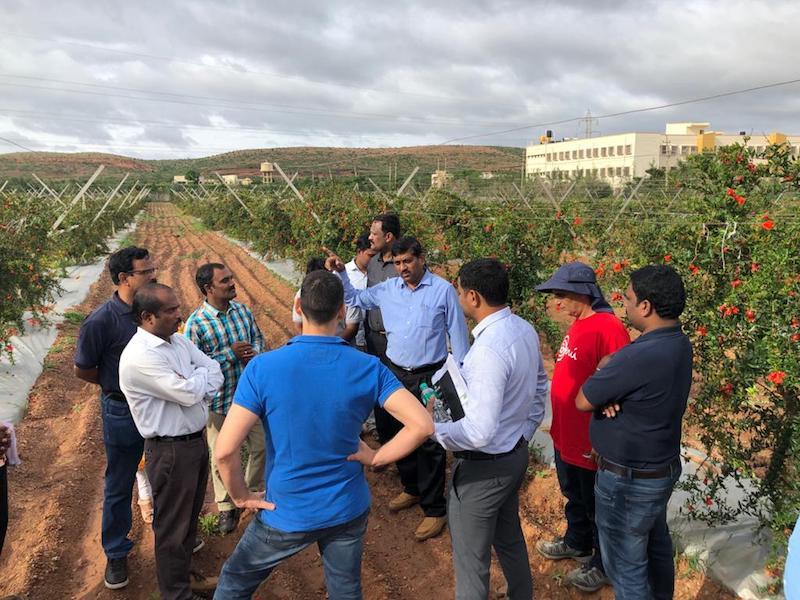 These CoEs are a part of the Indo- Israel Agricultural Project and were inaugurated at Bagalkot, Kolar and Dharwad. A CoE is an advanced & intensive agricultural farm that generates knowledge, demonstrates best practices and trains farmers based on Israeli novel agro-technology tailored to the local conditions. The newly inaugurated CoEs will help farmers in Karnataka choose the technology that suits them best, with the goal of doubling their income.

The Centre of Excellence for Pomegranates in Bagalkot will introduce irrigation management based on Precision Agriculture by satellite imaging, advanced fertigation (specialty fertilizers applied through drip irrigation) and beneficial demonstration of super Bhagwa canopy management techniques.

The Centre of Excellence for Mangoes in Kolar will generate end to end Mango best practices cultivation protocols, including new varieties of Israeli rootstocks based on advanced and commercial hi-tech nursery management.

It will also define canopy management guidelines for both rejuvenation of traditional trees and planting of new intensive young orchards. It will implement drip irrigation and fertigation systems that will result in optimal water use, both in efficiency and in productivity.

The Centre of Excellence for Vegetables in Dharwad will produce high-quality seedlings, demonstrate best practices in a range of Green-house structures with Israeli standards, introduce Israeli vegetable varieties, and generate nematode solutions.

In addition, it has been agreed to take forward the India- Israel Development Cooperation in agriculture to establish Indo- Israel Villages of Excellence (IIVOE) with the aim to create a model ecosystem in agriculture. This initiative will be implemented in eight states across India of which, Karnataka will be a leading state and will implement it in 10 villages linked to the Bagalkot & Kolar Centres of Excellence.

The IIVOE program will focus on establishing modern agriculture infrastructure, support the farmers with capacity building activities, and enhance market linkage to optimize the profitability of individual farmers.

CM  Yediyurappa thanked the Government of India and Israel for providing financial and technical assistance for establishment of these Centers of Excellence (COEs) under Indo-Israel Agricultural Project (IIAP) in Karnataka to transfer the innovative technologies for improving production, productivity and quality of horticulture produce in turn to achieve sustainability and improve economic status of the farmers”.

Union Minister of Agriculture & Farmers Welfare Narendra Singh Tomar, said, “These Centers will help farming community of Karnataka to get access to the latest innovative Israeli technologies and adopting them to increase production and productivity which will help in increasing the farmers income. These COEs have the capacity of 50,000 grafts production and 25 lakh vegetables seedlings production annually. About 20,000 farmers have visited these COEs to gain knowledge about the modern cultivation practices in horticulture”.

Dr. Ron Malka,  Ambassador of Israel to India, said, “This is a milestone in the development of the State's agriculture sector, and will give local farmers a competitive edge in the national and International market. This will also enable them to double their income, aligned with the vision of Honourable Prime Minister Narendra Modi.”

Karnataka Minister of Horticulture and Sericulture R. Shankar said “there is a lot of scope for adoption of new technologies in crop production and post-harvest management to increase the production and productivity of the horticulture produce in Karnataka."

"To provide these latest technologies to the farmers, Government of India in collaboration with State of Israel has helped in establishment of these Centres of Excellence for Mango in Kolar, Pomegranate in Bagalkot and Vegetables in Dharwad under the Indo Israel Agriculture Project (IIAP). Karnataka farmers are very progressive to adopt innovative technologies developed by these centres. Ensuring increase in production, productivity by reducing input cost in turn increasing farmer's income”.

Jonathan Zadka, Consul General of Israel to South India, Bengaluru said, “Agriculture and Food Security are important pillars of the cooperation between Israel and Karnataka. The three CoEs established in Karnataka are a wonderful example of the commitment to promote and strengthen these key attributes between us. We are proud to be able to strengthen the link between Israel and India and the Indian Farmers. Further, precision agriculture is what we build upon in promoting this cooperation and by doing so pushing for better engagement in Agri-tech and innovation.”