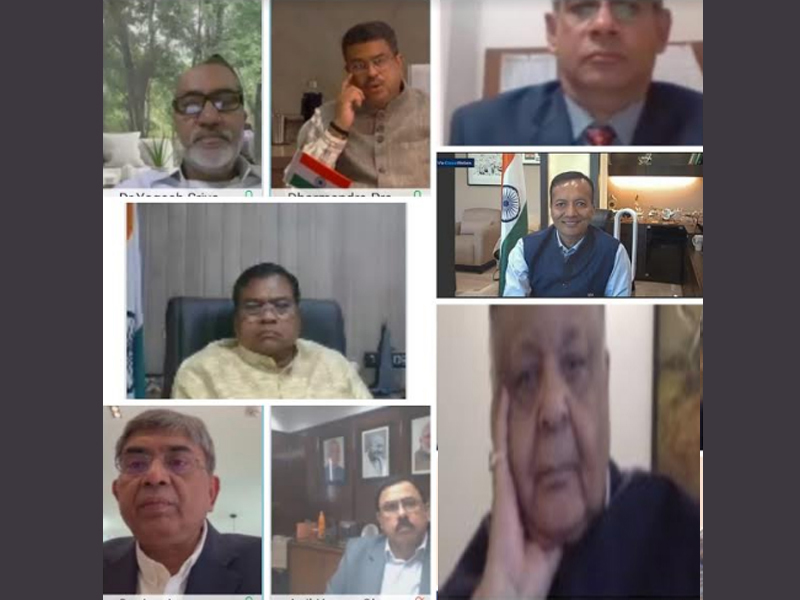 Mineral resources must be monetized through a simplified process to make India a global manufacturing hub: Steel Minister

In order to turn India into a global manufacturing hub, mineral resources must be monetized through a simplified process, he said, adding that the sector must be made profitable so that business investments can be increased.

He was addressing the National Mining Summit, themed "Reforms for Atma Nirbharta in Mining Sector organized by PHD Chamber of Commerce and Industry" on Wednesday.

Pradhan while talking about the reforms mentioned that the bidding system has helped in the equal distribution of the revenue. He said India's steel consumption per capita has also grown over the years.

Faggan Singh Kulaste, Minister of State for Steel ,mentioned that India is the land of resources.

While some of the resources are available abundantly, many need the intervention of international markets, he said.

A lot of reforms and developments are taking place in the mining sector under the leadership of Prime Minister Narendra Modi, he said.

He discussed that the government wants to get the intervention of the private sector in the auctions and India needs to work in the coal sector.

Government is in constant talks in introducing systematic reforms, leveraging ease of doing business while helping in boosting the sector and economy, making India self-reliant in the times to come.

Mr. Jayanta Roy, Senior Vice President, ICRA while presenting the knowledge report talked about the current status of the mining sector, key challenges, recent government interventions, key opportunities, rebooting for reforms 2.0, and changes proposed in the MMDR Act 1957. He also talked about the importance of the mining sector in the economy, employment generation, and its linkage in other sectors as well.

Talking about some of the challenges, he deliberated about the slow regulatory approvals, risk in capital blockage, environmental clearance, limited investment in mineral exploration, sub-optimal investment in technology, and others. He gave a detailed outlook about the key policy changes implemented recently in the mining sector paving way for the betterment of the industry with reforms such as iron ore and commercial coal mine auctions are helping India to step up in the global market.

Mr. Sanjay Aggarwal, President, PHD Chamber of Commerce and Industry in his presidential address complimented the Government of India for announcing bold structural reforms in the Mining sector that will go a long way in making India Atma Nirbhar in mining, coal, and steels sectors.

He mentioned that the reforms are likely to boost the production of various minerals by introducing competition, transparency, private sector participation, and an increase in foreign investment. The government has announced a composite exploration-cum-mining-cum-production regime under which 500 mining blocks will be offered through the open and transparent auction route through amendments to the Mines and Minerals (Development and Regulation) Act. He also discussed some silent features of the reforms announced that will help in boosting the mining sector in times to come.

Mr. Aggarwal emphasized that the Summit aims to bring policymakers and bureaucrats from Central and State Governments and entrepreneurs on a single platform to deliberate on the benefits of the reforms announced by the Government recently and give recommendations for circumventing challenges posed by the recent disruption in the sector.

Mr. Anil Chaudhary, Chairman, Minerals & Metals Committee, PHD Chamber of Commerce and Industry while giving an industry outlook, its challenges, and ways forward, deliberated about the role of mining in the development of the nation. He mentioned that India is blessed with good resources of Iron in the Country and, it is one of the largest miners of iron. We need to accelerate the requirements for the betterment of the economy for which we need reforms. He mentioned that Atma Nirbhar Bharat is a concept that everyone has to carry forward and the mining sector can be one of the major contributors in making India self-reliant.

Naveen Jindal, Co-Chairman, Minerals & Metals Committee, PHD Chamber of Commerce and Industry delivered a formal vote of thanks to all the delegates  and participants and talked about the need for stringent policies in the coal sector so that it benefits all and particularly the Industry itself.

The session was moderated by Dr. Yogesh Srivastav, Principal Director, PHD Chamber of Commerce and Industry, and was attended by many industry stalwarts around the world.