Kolkata/IBNS: Indian Naval Ship Kavaratti, the last in the series of four Anti-Submarine Warfare Corvettes (ASWC) built for the Indian Navy by the Kolkata-based Garden Reach Shipbuilders and Engineers Limited (GRSE), under Project 8, was commissioned on Thursday.

GRSE, a Mini Ratna Category 1 and leading shipyard of the country, had delivered this weapon-intensive platform to the Indian Navy in February this year.

INS Kavaratti was commissioned at Visakhapatnam by the Chief of the Army Staff, General MM Naravane, PVSM, AVSM, SM, VSM, ADC, in the presence of Rear Admiral VK Saxena, IN (Retd), Chairman & Managing Director, GRSE, and other senior officials of the Indian Navy.

INS Kavaratti and INS Kiltan are the first two major warships in the country to have the unique feature of Superstructure made of Carbon Fiber Composite Material. 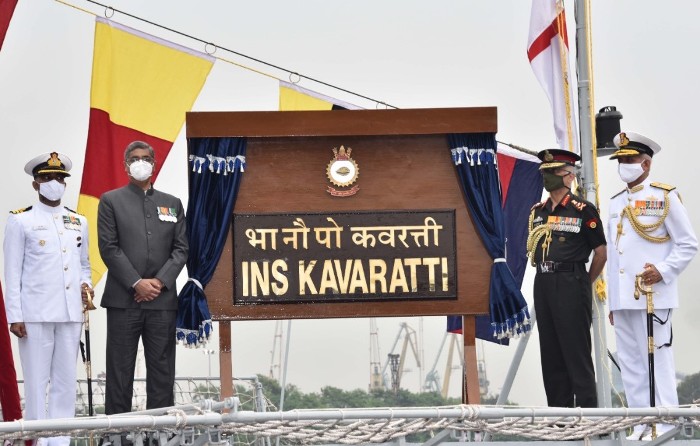 GRSE is the first shipyard in the country to have successfully achieved this feat, wherein composite material has been integrated with the steel hull of these two ships.

This new age material, has led to an overall reduced weight which in turn led to significant speed/ maneuverability improvements and increased stability of over 20 per cent.

According to GRSE, strategic innovation and indigenization are at the heart of the first three Anti-Submarine Warfare Corvettes.

INS Kavaratti commissioned on Thursday is expected to follow suit.

The P28 Class of ships are equipped to fight in nuclear, biological and chemical warfare conditions, and have a host of weapons and sensors.

This dominant platform is utilized for neutralizing enemy submarines by using weapons like torpedoes, rocket launchers and helicopters.

The stealth features make the ship nearly undetectable to the enemy both above and below the sea surface, according to GRSE.

The shipyard plans to deliver the last ship of the LCU Class by this year end and the first P17A ship is expected to be launched in December this year, well ahead of schedule