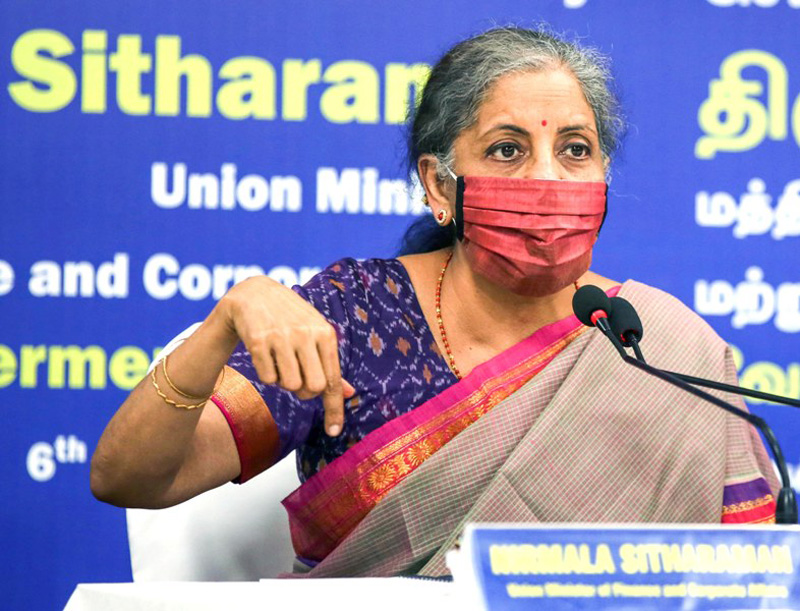 New Delhi/UNI: The Narendra Modi government on Monday announced proposals to stimulate demand by front-loading or advancing some of the expenditure with some offsetting changes and the other directly linked to an increase in the GDP.

Addressing the media, Union Finance Minister Nirmala Sitharaman said, "The pandemic has adversely affected the economy. Supply constraints have eased but consumer demand is still affected. The proposals are designed to stimulate demand in a fiscally prudent way - some of them involve advancing expenditure, with offsetting changes later and others are directly linked to increasing GDP."

She said, "We estimate that the measures announced today, for boosting consumer spending and capital expenditure, will boost demand by Rs 73,000 crores, to be spent by March 31, 2021."

Sithraman said care has been taken that the burden does not fall on the common man.

"Capital expenditure - money spent on infrastructure and asset creation - has a multiplier effect on the economy, it not only improves current GDP but also future GDP, we want to give a new thrust to capital expenditure of both states and the Centre," she said.

She said indications are that savings of government and organized sector employees have increased, and the government wants to incentivise such people to boost demand for the benefit of the less fortunate.

Under the LTC Cash Voucher Scheme, government employees can opt to receive cash amounting to leave encashment plus three times ticket fare, to buy something - items which attract a GST of 12 per cent or more.

Only digital transactions allowed, GST Invoice to be produced, the Minister said.

The LTC Cash Voucher Scheme will generate additional consumer demand in the range of Rs 28,000 crore, she said.

"Estimated cost of LTC Cash Voucher Scheme For Central government will be Rs 5,675 crore and for PSBs & PSUs, it will be Rs 1,900 crore.

"Tax concessions for LTC tickets available for state government and private sector too, if they choose to give such facility, these employees too can benefit," she said.

In the second case, all central government employees can now get interest-free advance of Rs 10,000, in the form of a prepaid RuPay Card, to be spent by March 31.

"Special Festival Advance Scheme for non-gazetted employees is being revived as a one-time measure, for gazetted employees too. All central government employees can now get an interest-free advance of Rs 10,000, in the form of a prepaid RuPay Card, to be spent by March 31, 2021."

The Minister said the one-time disbursement of Special Festival Advance Scheme is expected to amount to Rs 4,000 crore; if given by all state governments, another Rs. 8,000 crore is expected to be disbursed, adding that employees can spend this on any festival.

In another economic booster, the government said it will be issuing a special interest-free 50-year loan to states for Rs 12,000 crore capital expenditure.

Capital expenditure - money spent on infrastructure and asset creation - has a multiplier effect on the economy, it not only improves current GDP but also future GDP, we want to give a new thrust to capital expenditure of both states and Centre, the Finance Minister stated.

She said both Part 1 and Part 2 of interest-free loans given to states are to be spent by March 31, 2021 -- 50 per cent will be given initially, remaining upon utilization of the first 50 per cent.

Additional budget of Rs 25,000 crore (in addition to Rs 4.13 lakh crore given in Budget2020) is being provided for capital expenditure on roads, defence, water supply, urban development and domestically produced capital equipment, she said.

She said needs of the poor and weaker sections have been addressed in the Aatmanirbhar Bharat package, supply situation has improved, but consumer demand needs to be given a boost.