Kolkata/IBNS: A state-of-the-art indigenous underwater CNC Plasma Cutting Machine and a Modern Hull Block Fabrication Complex has been added to the Kolkata-based Garden Reach Shipbuilders and Engineers (GRSE) Limited, a premier warship builder of the nation.

Part of the modernisation of this Miniratna Category 1 Defence PSU, the facilities were inaugurated virtually by Defence Minister Rajnath Singh at GRSE’s Rajabagan Dockyard Unit in Kolkata.

The CNC Plasma Cutting facility, set up at a cost of Rs 4.14 crore, will enhance the plate cutting capacity by 30 per cent, according to GRSE.

The Complex, constructed at a cost of Rs 19 crore for Hull block Fabrication will enable concurrent construction of large (40 tonne) hull blocks in a covered environment, which will facilitate modular Integrated Construction of warships with an enhancement in production capacity of hull blocks by 25 per cent.

Both these facilities will are expected to enhance the production capacity of the shipyard, especially during execution of the three major warship building projects consisting of 15 warships that GRSE is presently handling for the Indian Navy - the P17A Stealth Frigates, the ASW Shallow Water Craft and the Survey Vessels (Large), according to a release.

This will enhance GRSE’s capability for construction of higher capacity blocks to meet the production requirement for the ongoing prestigious P17A Project at the Main Works Unit of GRSE. 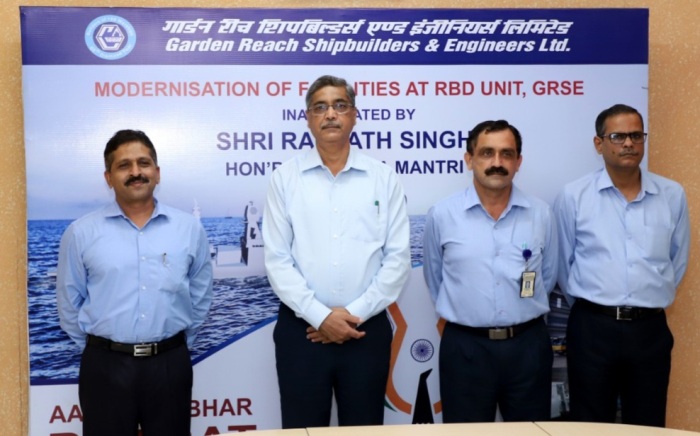 Celebrating the ‘Atmanirbhar Bharat Abhiyaan’, GRSE has several activities planned to be undertaken during the Atmanirbhar Week including inauguration of a new product, the Portable Pedestrian (Assault) Bridge, which is a first of its kind, the release said.

According to records, the shipyard has delivered 105 warships to the Indian Maritime Forces, the highest deliveries by any shipyard in the country, till date.