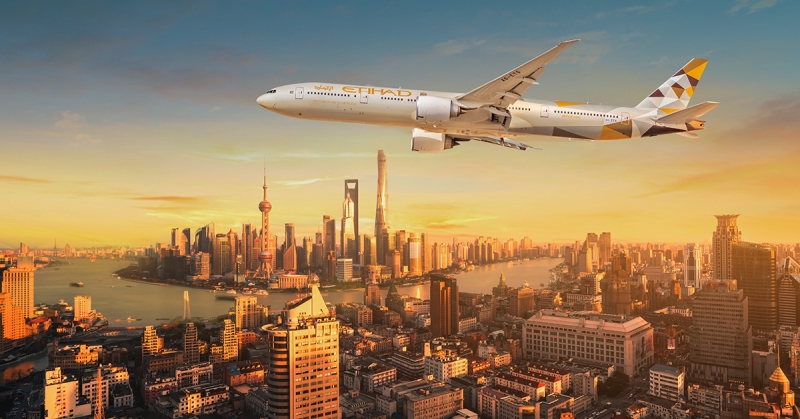 Amid passenger and revenue drop in H1, Etihad to widen network and increase flight frequencies

Abu Dhabi/IBNS: Etihad Airways, the second largest airline of UAE, has reported a 58 per cent drop in passengers and a revenue loss of 38 per cent in H1 (Jan-Jun 2020) compared to the corresponding period in 2019.

"Etihad carried 3.5 million passengers in H1 compared to 8.2 million in H1 2019, a reduction of 58 per cent from the same period the previous year," the airline said on Thursday.

The airline said its average seat load factor, which measures the percentage of available seating capacity, was 71 per cent. This was partially off-set by a 27 per cent reduction in direct operating costs to $ 1.9 billion and a 21 per cent reduction in general and administrative expenses to $ 0.40 billion,  both driven by management cost containment initiatives and reduced operations.

In the year ago period, direct operating costs stood at $ 2.7 billion and the general and administrative expenses were $ 0.50 billion.

Q1 seat load factor was 74%, the company said, adding that January’s performance was significantly stronger than the same month in 2019, with a seat load factor of 81.9 per cent, and yield at $ 5.92 cents.

However, the airline saw a significant decrease in Q2 operating revenues following COVID-19 flight suspensions, with 70 per cent of its fleet grounded, Etihad said.

Seat load factor for this period was 16 per cent, mainly driven by the operation of special (repatriation) flights, and the resumption of a limited network of transfer services via Abu Dhabi in early June.

Tony Douglas, Group Chief Executive Officer, Etihad Aviation Group, said: “Etihad faced a set of enormous and unpredictable challenges in the first six months of the year. We started 2020 strong, and recorded encouraging results as part of our continuing transformation programme. This left us in a relatively robust position when COVID-19 hit, allowing us to act with agility, and to mobilise all available resources as the crisis deepened, taking major steps to reduce costs through a wide-reaching series of measures.

“While we have revised our outlook for the rest of 2020 based on current realities, we remain optimistic that as international borders re-open, we will increase our flying and carry more guests securely and with greater peace of mind, supported by the Etihad Wellness programme and our new Wellness Ambassadors.

"By September, we aim to increase our worldwide flights to half our pre-COVID-19 capacity. Looking forward, we rest assured that the UAE is leading the way in the research for a vaccine against COVID-19.

The incredible efforts Abu Dhabi is making to ensure the safety and security of its residents and visitors will soon enable us to welcome the world back to our amazing home. This commitment was successfully highlighted by the recent hosting of major UFC events in the capital.”

The airline operated up to 40 of its fleet of 97 passenger aircraft in Q2, including Boeing 787 Dreamliners, 777-300ERs, and Airbus A320 family aircraft as belly-hold cargo freighters to complement Etihad Cargo’s operational fleet of six 777-200F freighters.

Between 25 March and 15 June, over 640 special passenger flights were operated to 45 online and offline destinations, using the passenger cabins of these aircraft to fly foreign nationals out of the UAE, and to bring UAE nationals back home.

Adam Boukadida, Chief Financial Officer, Etihad Aviation Group, said: “This year started strong, riding on the positive momentum gained in 2019, and by the end of the first quarter, the airline was on track to achieve a 2020 EBITDA of US$ 900 million (2019: US$ 453 million).

"Etihad managed to maintain a satisfactory level of liquidity despite a major drop in revenues, while continuing to raise new liquidity facilities supported by local and international financial institutions.

"This was supported by maintaining an ‘A with a stable outlook’ Fitch rating in April, at the height of the pandemic. Etihad was one of a small number of airlines to maintain its pre-COVID-19 credit rating.

“A greater emphasis is being placed on a drive towards increased cost optimisation and efficiencies across the entire business to face the hurdles placed in our way by COVID-19. Our suppliers and partners have also worked closely with us, including the arrangement of payment holidays with lessors and savings discussions with all of our supply chain, so we can re-emerge stronger together.”

With the easing of travel restrictions by UAE regulatory authorities on outbound and inbound travel for citizens and residents, the company said it is gradually resuming services to more destinations across its global network.

"Throughout August and September, subject to the lifting of international restrictions and the re-opening of individual markets, the airline aims to fly to 61 destinations worldwide from its Abu Dhabi hub, operating approximately 50 per cent of its pre-COVID capacity," the company said.

Subject to the applicable government approvals, Etihad’s summer schedule will feature a wider network and increased frequencies to the following destinations from, to, or via Abu Dhabi: