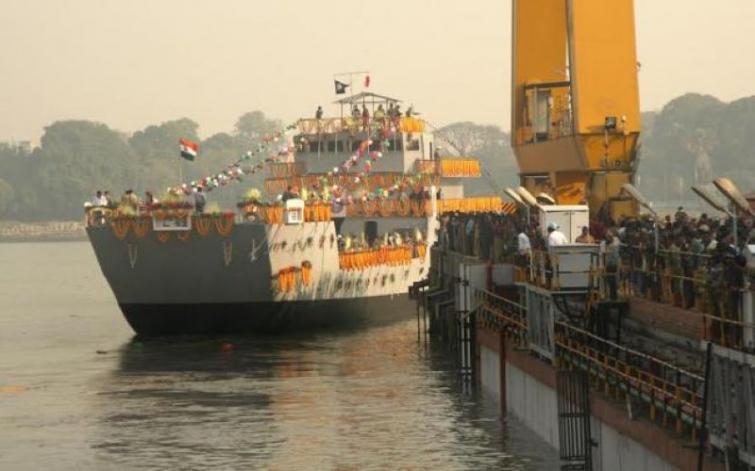 Kolkata/IBNS: Garden Reach Shipbuilders & Engineers Limited (GRSE), one of the leading warship builders in the country, have announced its financial results for the Q4 & FY20 ended on Mar 31, 2020.

The company is currently executing five projects with the construction of 18 ships. Of these projects, four projects are for Indian Navy and one Project is for Indian Coast Guard.

As on Mar 31, 2020, the company order book position stands at Rs.26,544 crores with shipbuilding projects related to Order Book Value of Rs. 26,281 Crores. During the reported period, the company delivered four ships, two for Indian Navy and two for Indian Coast Guard.

With these deliveries, the company delivered four ships in total during the 12 months period from Apr 2019 to Mar 2020.This makes the total warship delivered numbers as 104 till the end of Mar 31, 2020.

Under Indian Navy Contract for construction of three Advanced Stealth Frigates with total contract value of Rs. 19,293 crores, the company recently did the Keel Laying for the second ship which is ahead of the contractual timelines.

The construction of the first ship of this contract is progressing satisfactorily and the company has plans to have the start production for the third ship shortly.

In respect of the Survey Vessel (Large) Project of Indian Navy for four Ships, the company has done with the Keel Laying for the first ship and started production for the second ship during the reported period.

Company operations were impacted during the lockdown period imposed in view of the Covid-19 Pandemic. However partial operations have resumed and the company has made a catch-up plan to make up the production losses suffered due to lockdown.

There has been some impact on the Company's Assets / properties due to the Cyclone Amphan which hit some parts of West Bengal including Kolkata.

Though there has been no major loss to the Shipyard assets, suitable steps have been taken towards lodging the Insurance claims with the underwriter as all assets are fully covered under the insurance policies.