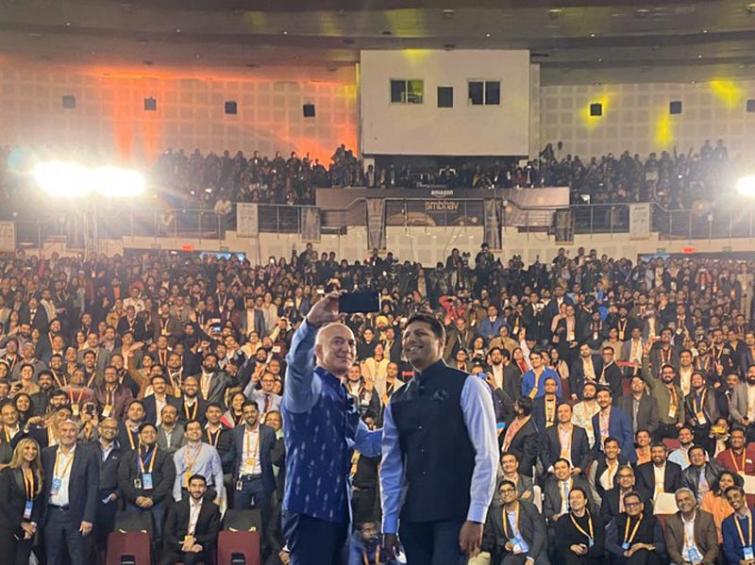 Amazon to create one million jobs in India in next five years: Jeff Bezos

Jeff made the announcement a day after Indian Commerce and Industry Minister Piyush Goyal said the e-commerce giant did not do India any big favours by announcing the new USD 1 billion investment recently.

Jeff, who is on a three-day visit to India, said in a statement: "We will use Amazon's global footprint to enable US$10 billion in exports of Indian products to the rest of the world by 2025. Our investments in India will create an additional 1 million jobs across the country by 2025."

The company aims to digitise 10 million MSMEs with this investment, helping Indian businesses grow by selling online worldwide and enabling USD 10B in cumulative exports by 2025.

As part of this effort, Amazon will establish 100 Digital Haats in cities and villages throughout India.

Bezos announced the plan in front of thousands of MSMEs at the inaugural Amazon SMBhav Summit.

“We’re committed to being a long-term partner of India. And actions speak louder than words,” said Bezos.

“Over the next five years, Amazon will invest an incremental US$1 billion to digitize micro and small businesses in cities, towns, and villages across India, helping them reach more customers than ever before. This initiative will use Amazon’s global footprint to create US$10 billion in India exports by 2025. Our hope is that this investment will bring millions more people into the future prosperity of India and at the same time expose the world to the ‘Make in India’ products that represent India’s rich, diverse culture,” he said.

Today, there are more than 550,000 sellers on the Amazon India marketplace and more than 60,000 Indian manufacturers and brands are exporting their “Make in India” products to customers worldwide on Amazon.

With Wednesday’s announcement, Amazon will help Indian MSMEs grow their cumulative exports to US$10 billion by 2025 through the Amazon Global Selling programme, which enables businesses to sell on Amazon marketplaces globally.