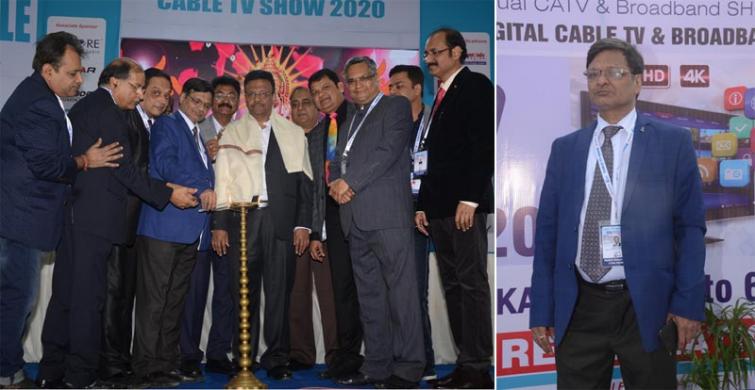 Kolkata/IBNS: Kolkata mayor Firhad Hakim on Monday urged the cable TV operators in the city to take immediate steps to remove the jungle of dead cables spread all over the city like eyesores.

“It is my earnest request to all the cable operators, MSOs and CTMA that serious steps must be taken to remove the jungle of dead cables all over the city. The state government is spending so much to beautify the city and these cables, which are an eyesore, are spoiling the image of the city and causing trouble to the citizens, he said inaugurating the 23rd CABLE TV SHOW 2020 Kolkata, one of the largest trade shows on digital cable television & broadband in India.

Representatives of the cable television sector from across India and SAARC countries were present.

Suresh Sethia, Member, Executive Committee, Cable Television Equipments & Manufacturer’s Association (CTMA), said: “We fully support the Mayor’s concern. All dead cables must be removed and this would be possible when all the stakeholders – cable operators, MSOs, telecom companies come together to work out a solution in consultation with Kolkata Municipal Corporation."

Pawan Jajodia, Treasurer & Chairman Exhibition, CTMA, said: “CTMA will extend full support to the Mayor’s concern and reach out to the MSOs and cable operators. The CABLE TV SHOW 2020 is the 23rd Annual B2B Show organized by CTMA. There are 20 pavilions and 100 stalls put up this year for showcasing a wide range of state-of-the-art products and services related to the cable television industry."

K K Binani, Secretary, CTMA, said: “The Cable TV sector has now completed three decades of operations and there have been rapid strides in technological upgrade and cable television network penetration across India. CATV is now an important aspect of Internet of Things (IOT). Content is now king and there are many options for its medium of delivery. Cable TV is one such very important medium.”

More than 10,000 cable operators and representatives, traders, manufacturers, channel partners, distributors, broadcasters and Multi-System Operators (MSOs) from across India and overseas are expected to visit the CABLE TV SHOW 2020.

The cable television (CATV) sector has reached 150 million homes across India and West Bengal is estimated to cover 11 million cable homes with 25,000 cable operators. Currently, of the over 1000 channels, more than 500 television channels are provided by broadcasters on free to air basis.

“Since the complete digitization of the cable sector, India is set to enter the next era of digital television. The Cable TV Show 2020 will enable the sector to prepare and move ahead in this emerging scenario. CTMA is ready to play its role in smooth conduct of the new regime,” said  Rajesh Doshi, President, CTMA.