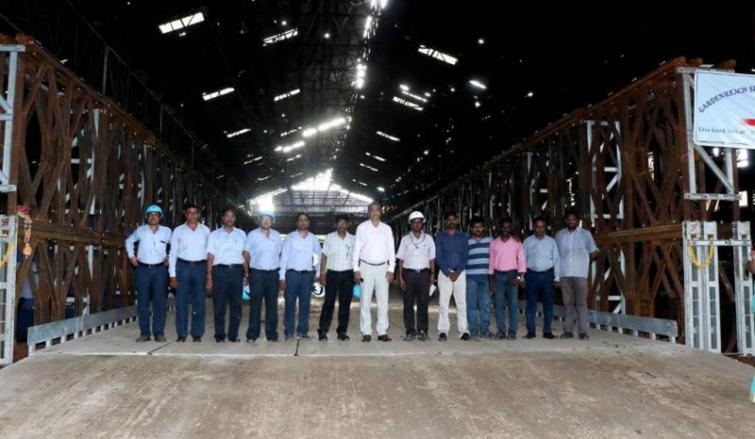 Kolkata: The Research and Development team of city-based Garden Reach Shipbuilders & Engineers Limited(GRSE) has turned the construction of a bailey type double-lane portable steel bridge into a reality,  in record time.

It started with the immediate market requirement of a two-lane quick-launch bridge to supplement the existing single-lane bailey bridge.

Taking up the challenge, the Engineering Design team at GRSE embarked on the process of design, fabrication and erection of the bridge on a war footing.

The construction of the bridge was carried out inside the Company’s premises near Belur station, in Kolkata. Scientists from the Structural Engineering Research Centre (SERC), CSIR have validated the bridge through live load tested for double Class-A vehicle loading as per latest Indian standard, viz., Indian Road Congress (IRC-6).

Construction of Launching Abutment for the bridge was completed and the bridge, the first of its kind in India, was launched on 30 Aug 2019.

The pre-fabricated bridge has a span of 42.67m without intermediate pier and a width of 7.5m. It can support two-way traffic comprising heavy vehicles with a total load of about 110MT.With a modular design facilitating easy assembly, these bridges can be erected quickly even in the most demanding of terrains and conditions.

These are ideal for remote areas as onsite installation infrastructure is not required.

Usually, the foundation takes about 28 days for the reinforced concrete pedestal to gather maximum strength, following which the bridge structure can be properly placed and fixed on it.

Considering these aspects, the bridge is expected to be thrown open to traffic in about 30-45 days from the day of commencement of foundation work.

With the launch of the new Bailey bridge, GRSE has reinforced its position as the largest manufacturer of bailey type portable steel bridges in India.

The pioneer has around 70% market share and has delivered over 5100 bridges to date in the 40 years since it started bridge fabrication.